Clay Aiken just came out of the closet...well, I have an announcement to make myself.
I'm a bald-headed Black man!!!
on September 24, 2008 No comments:

She's Gone Too Far This Time! 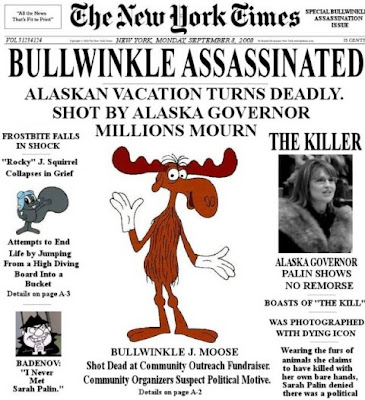 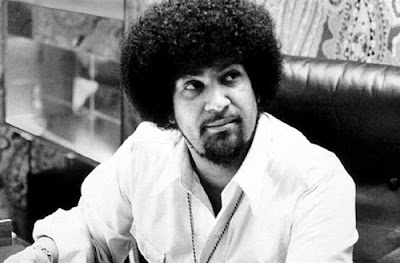 Norman Jesse Whitfield (May 12, 1940 – September 16, 2008) was an American songwriter and producer, best known for his work with Berry Gordy's Motown label during the 1960s. He is credited as being one of the creators of the Motown Sound, as well as one of the major instrumental figures in the late-60s sub-genre of psychedelic soul.

Of the hit singles Whitfield produced in his 25-year career included "I Heard It through the Grapevine", "Ain't Too Proud to Beg", "Cloud Nine", "War", "Papa Was a Rolling Stone", "Smiling Faces Sometimes" and "Car Wash". Alongside his Motown lyrical collaborator Barrett Strong, he was inducted to the Songwriter's Hall of Fame in 2004.
Early career with Motown

At 19, Whitfield began hanging around at Motown's Hitsville U.S.A. offices, trying to get a chance at working for the growing label. Gordy recognized Whitfield's persistence and hired him in the quality control department that determined which songs would or would not be released by the label. Whitfield eventually joined Motown's in-house songwriting staff. Whitfield had a few successes including co-composing Marvin Gaye's early hits including "Pride & Joy", The Marvelettes' "Too Many Fish in the Sea" and The Velvelettes' "Needle in a Haystack", but he found his place at Motown when he began producing the recordings of his songs. His big break came when he took over Smokey Robinson's role as the main producer for The Temptations in 1966, after his "Ain't Too Proud to Beg" performed better than Robinson's "Get Ready" on the pop charts.

From 1966 until 1974, Whitfield produced virtually all of the material for The Temptations, experimenting with sound effects and other production techniques on the earliest of his records for them.[1] He found a songwriting collaborator in lyricist Barrett Strong, the performer on Motown's first hit record, "Money (That's What I Want)", and wrote material for the Tempts and for other Motown artists such as Marvin Gaye and Gladys Knight & the Pips, both of whom recorded Whitfield-produced hit versions of the Whitfield/Strong composition "I Heard It Through the Grapevine." The Gladys Knight & the Pips version was the best-selling Motown single ever to that point, but it was replaced a year later by Marvin Gaye's version.

After Temptations lead singer David Ruffin was replaced with Dennis Edwards in 1968, Whitfield moved the group into a harder, darker sound that featured a blend of psychedelic rock and funk heavily inspired by the work of Sly & the Family Stone and Funkadelic, and also began changing the subject matter of the songs, moving away from the trademark poetic romance to the social issues of the time, such as war, poverty, politics, etc. The first Temptations single to feature this new "psychedelic soul" style was "Cloud Nine" in late 1968, which earned Motown its first Grammy award (for Best Rhythm & Blues Performance by a Duo or Group). A second Best R&B Group Performance Grammy for Whitfield and the Tempts came in 1973 with "Papa Was a Rollin' Stone." The instrumental B-side to "Papa Was a Rollin' Stone" earned Whitfield a Grammy with arranger Paul Riser for Best R&B Instrumental Performance, and Whitfield and Barrett Strong shared the songwriters' award for Best R&B Song.

The psychedelic soul records Whitfield produced for the Temptations and other artists such as Edwin Starr and The Undisputed Truth experimented with and updated the Motown sound for the late-1960s.[1] Longer song durations, distorted guitars, multitracked drums, and unusual vocal arrangements became trademarks of Whitfield's productions, and later of records produced by Motown staffers he coached, including Frank Wilson. But friction and antagonism continued to grow between Whitfield and the Temptations during this time because the group disliked how Whitfield put more emphasis on instrumentation instead of their vocals and the group disliked that he would not write romantic ballads for them. However, by this time Whitfield was producing hit records for Edwin Starr, the Undisputed Truth and Rare Earth (band)
Whitfield Records and later years

In 1973, Whitfield left Motown to form his own record label, Whitfield Records. In the beginning, his only act was The Undisputed Truth, which he had convinced to leave Motown. They never really had much more chart success, but Whitfield had a smash hit in 1976 with Rose Royce's "Car Wash", issued on MCA Records. Rose Royce (whose members were originally Starr's backing band while at Motown) went on to produce three more popular albums, but never could top the success of "Car Wash," which served as the theme song to the 1976 motion picture Car Wash. The Car Wash soundtrack won Whitfield a 1977 Grammy Award for Best Score Soundtrack Album.[1]

In the early 1980s, Whitfield began working producing for Motown again, helming The Temptations' 1983 hit single "Sail Away" and the soundtrack to The Last Dragon.[1]

On January 18, 2005, Whitfield pleaded guilty for failing to report royalty income he earned from 1995 to 1999 to the Internal Revenue Service. Facing charges of tax evasion on over $2 million worth of income, he was sentenced to six months of house arrest and a $25,000 fine. The producer was not imprisoned because of health problems such as diabetes.

During his last months alive, Whitfield stayed bedded at Los Angeles' Cedars-Sinai Medical Center where he underwent treatment for his bout with diabetes and other ailments. Within a few weeks before his death, Whitfield fell into a coma, which he eventually recovered from[3]. According to The Undisputed Truth leader Joe Harris, Whitfield died on September 16, 2008 at approximately 3:30 pm.

It's Going To Get Worse 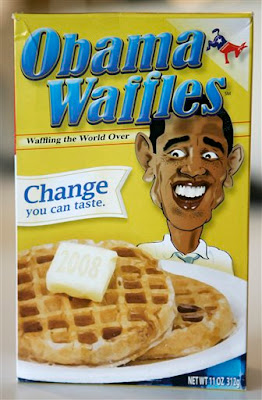 WASHINGTON (AP) — Activists at a conservative political forum snapped up boxes of waffle mix depicting Democratic presidential candidate Barack Obama as a racial stereotype on its front and wearing Arab-like headdress on its top flap.

Values Voter Summit organizers cut off sales of Obama Waffles boxes on Saturday, saying they had not realized the boxes displayed "offensive material." The summit and the exhibit hall where the boxes were sold had been open since Thursday afternoon.

The box was meant as political satire, said Mark Whitlock and Bob DeMoss, two writers from Franklin, Tenn., who created the mix. They sold it for $10 a box from a rented booth at the summit sponsored by the lobbying arm of the Family Research Council.

David Nammo, executive director of the lobbying group FRC Action, said summit organizers were told the boxes were a parody of Obama's policy positions but had not examined them closely.

Republican Party stalwarts Newt Gingrich and Mitt Romney were among speakers at the forum, which officials said drew 2,100 activists from 44 states.

While Obama Waffles takes aim at Obama's politics by poking fun at his public remarks and positions on issues, it also plays off the old image of the pancake-mix icon Aunt Jemima, which has been widely criticized as a demeaning stereotype. Obama is portrayed with popping eyes and big, thick lips as he stares at a plate of waffles and smiles broadly.

Placing Obama in Arab-like headdress recalls the false rumor that he is a follower of Islam, though he is actually a Christian.

On the back of the box, Obama is depicted in stereotypical Mexican dress, including a sombrero, above a recipe for "Open Border Fiesta Waffles" that says it can serve "4 or more illegal aliens." The recipe includes a tip: "While waiting for these zesty treats to invade your home, why not learn a foreign language?"

"It's the ultimate political souvenir," DeMoss told a customer.

Asked if he considered the pictures of Obama on the box to be racial stereotypes, Whitlock said: "We had some people mention that to us, but you think of Newman's Own or Emeril's — there are tons and tons of personality-branded food products on the market. So we've taken that model and, using political satire, have highlighted his policies, his position changes."

The socially conservative public policy groups American Values and Focus on the Family Action co-sponsored the summit.
on September 13, 2008 No comments: 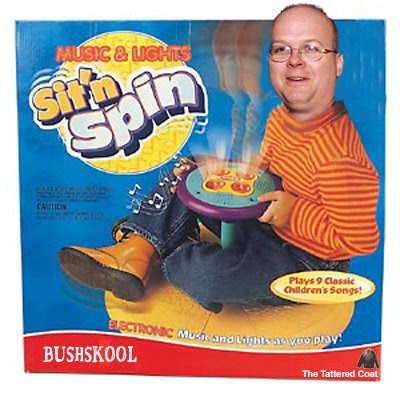 If you grow up in Hawaii you're 'exotic.'
Grow up in Alaska eating mooseburgers, you're the quintessential 'American story.'

Similarly, if you name your kid Barack you're 'unpatriotic.'
Name your kids Trig and Track, you're 'colorful.'

If you're a Democrat and you make a VP pick without fully vetting the individual you're 'reckless.'
A Republican who doesn't fully vet is a 'maverick.'

If you spend 3 years as a community organizer growing your organization from a staff of 1 to 13 and your budget from $70,000 to $400,000, then become the first black President of the Harvard Law Review,create a voter regstration drive that registers 150,000 new African Amerian voters, spend 12 years as a Constitutional Law professor,then spend nearly 8 more years as a State Senator representing a district with over 750,000 people, becoming chairman of the state Senate's Health and Human Services committee, then spend nearly 4 years in the United States Senate representing a state of nearly 13 million people, sponsoring 131 bills and serving on the Foreign Affairs, Environment and Public Works and Veteran's Affairs committees, you are woefully inexperienced.
If you spend 4 years on the city council and 6 years as the mayor of a town with less than 7,000 people, then spend 20 months as the governor of a state with 650,000 people, you've got the most executive experience of anyone on either ticket, are the Commander in Chief of the Alaska military and are well qualified to lead the nation should you be called upon to do so because your state is the closest state to Russia.

If you are a candidate with a Harvard law degree you are 'an elitist 'out of touch' with the real America.
If you are a legacy (dad and granddad were admirals) graduate of Annapolis, with multiple disciplinary infractions you are a hero.

If you manage a multi-million dollar nationwide campaign, you are an 'empty suit'.
If you are a part time mayor of a town of 7000 people, you are an 'experienced executive'.

If you go to a south side Chicago church, your beliefs are 'extremist'.
If you believe in creationism and don't believe gobal warming is man made, you are 'strongly principled'.

If you cheated on your first wife with a rich heiress, and left your disfigured wife and married the heiress the next month, you're a Christian.
If you have been married to the same woman for 19 years with whom you are raising two beautiful daughters you're 'risky'.

If you're a black single mother of 4 who waits for 22 hours after her water breaks to seek medical attention, you're an irresponsible parent, endangering the life of your unborn child.
But if you're a white married mother who waits 22 hours, you're spunky. 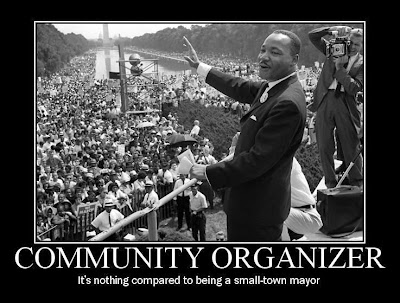 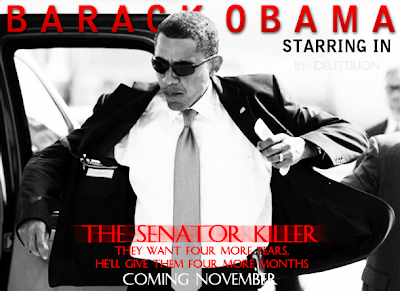 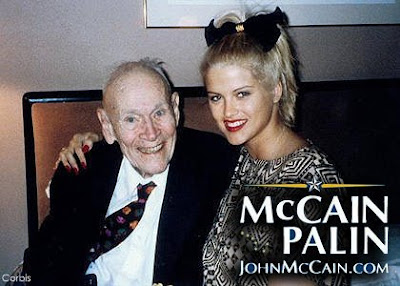