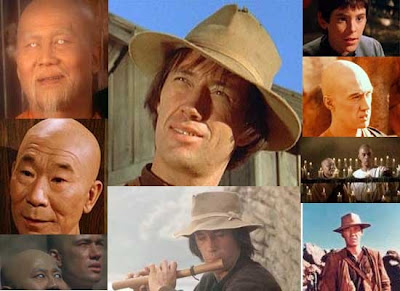 David Carradine was found dead yesterday in a hotel room in Bangkok. The circumstances of his death are outrageously sensationalistic. I won’t go into any detail other than to remark that these circumstances have helped ensure a steady barrage of media coverage. Just now, tuning into NPR in my car, I heard part of a David Carradine interview, replayed to commemorate the occasion of his death.

He was a famous and much-loved actor. Tributes to Carradine are pouring in. In discussion threads devoted to Carradine, you’ll find many nostalgic accounts of childhood evenings spent watching his TV show, Kung Fu.

Some Asian-Americans, such as myself, may find these tributes quite upsetting.

I remind myself that David Carradine was an actor. He was doing a job for money. It’s difficult to draw a work/life dividing line when it comes to celebrity actors, but the line does exist. And I cannot presume to judge the moral worth of David Carradine’s life. He was a human being whose life is just as worthy of respect, just as precious, as the life of any other human being.

But I can judge his career. Fuck David Carradine’s godawful racist career!

For many Asian-Americans, tributes to Carradine’s careeer feel like a cold and bitter insult. Bruce Lee was originally considered for the lead in Kung Fu, but the producers decided America was not ready for an Asian man as a heroic lead. David Carradine was chosen instead. His character, Kwai Chang Caine, was supposed to be half-Chinese and half-white. All the rest of the characters reacted to him as if he were Asian, when he was quite obviously 100% white. This confused the hell out of me when I first saw the show. Once I realized he was supposed to be Asian, it made me angry.

Why did I watch it in the first place? Well, Kung Fu was a pretty good show. It was plotted and shot and edited skillfully. It touched on important philosophical and cultural themes. It was ground-breaking, unique, and had some of the only respectful depictions of Asian culture available on American television in the 1970s. What were the alternatives? The servile, scraping, Hop Sing on Bonanza? Minor characters on M.A.S.H.? A scattered assortment of cackling Fu Manchu-type villains? It would be hard for Asian-Americans not to want to watch Kung Fu. But every time we watched it, we were reminded that it was possible for white people to take the best of what they wanted from Asian culture. Asian culture was mysterious and cool, but real Asian people were unwanted and superfluous. They could easily be replaced by the right kind of white man. And nobody remarked about it, nobody complained… at least it seemed that way.

I was very young when I saw reruns of Kung Fu, but I caught on quickly, and began to dread the sight of David Carradine’s face. I still have some fond memories of sequences that didn’t involve Carradine, such as the training sequences set in China. Then I stopped watching the reruns because the experience became too painful. Sitting there and watching was like… offering your body up to be erased. It’s hard to explain.

Anyway, it was an ignominious start to a career, and it went downhill from there. Carradine milked Kung Fu for as long as possible, and when the milk ran dry, he just squeezed harder, until blood dripped out of the metaphorical udders. He even did a series of Kung Fu workout videos. Quentin Tarantino capitalized on Kung Fu nostalgia by casting Carradine in that pretentious faux-ironic Asiaphile crapfest, Kill Bill. And a few years ago, Carradine did a series of Kung Fu-inspired Yellowbook.com commercials. Get it? Yellow Book? Wink wink, nudge nudge, vomit. In 2009, the heavily yellowfaced Carradine had a role in Crank 2 as a lecherous Chinese gangster named “Poon Dong”. Wink wink… and so on.

I don’t blame David Carradine for all the anti-Asian racism in America. But he had an important and highly visible role in a vicious feedback loop. Audiences identified with his performance of a calm, detached, self-important masculinity seemingly grounded in an exotic Asian tradition. He satisfied certain urges of the audience in that regard, and as he performed, he innovated, and created new and more refined stereotypes with extra layers of self-awareness and sophistication. His performances also worked to naturalize the desire of white people to appropriate the aspects of Asian culture they happened to find most appealing.

In a better world, Bruce Lee would have gotten the lead role in Kung Fu. It would have been a truly great show, not a merely good one. David Carradine would have gone on to other projects, and perhaps he would have become a great and versatile actor, meeting new challenges and truly acting instead of being frozen in the same stale role for decades. He was a man of many diverse talents and could have found fulfillment and success in other realms as well. If I continue much longer in this morbid vein I’ll write a full-fledged alternate history obituary, so I’ll stop… although I would have liked to say more good things about David Carradine’s impact on the world. But in all honesty, the way his choices affected my life turned out to be very negative, and I wish it didn’t have to end like that.
on June 05, 2009 No comments: