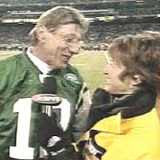 We all know what happened when Joe Namath had too much to drink & hit on Suzy Kolber ON THE AIR.....He told her how much he wanted to "have relations" with her. Apparently it's a Jets tradition.


Why Does Hip Hop Get Such A Bad Rap When This Is Going Down?

Bear in mind as you read this story this nonsense has been going on for years. Not months, not weeks, not days, but for years. As this is going on we have not seen or heard a call to end any Jets games. Also interesting to note we have not seen or heard a peep from that fat ass sports writer Jason Whitlock bashing on this the way he does Hip Hop. We don't see Stanely Crouch sounding the alarm calling for change. Nor did we hear dumb ass Don Imus point out that perhaps he was inspired to call women Nappy Headed Hoes after attending one of these games.

For the record, I have always pointed out the madness that takes place at my beloved Raider Games including two unrelated shootings last month in the parking lot. Hip Hop had nothing to do with it. I have also pointed out the riots that take place after every 'Big Game' between Cal-Stanford, two of the nations most prestigious schools. I have always pointed out the damage done and the injuries sustained make the worse Hip Hop shows seem like a church gathering. Reading this story in the NY Times about the NY Jets tops the cake.
The next time you hear a Bill 'Neo-Nazi Scumbag' O'Reilly rant or read a Jason 'Uncle Ruckus' Whitlock column tell them to shut up and stick to subject matter closer to home and from the looks of things-more dangerous. Hip Hop doesn't hate women. The New York Jets Do!


At halftime of the Jets' home game against the Pittsburgh Steelers on Sunday, several hundred men lined one of Giants Stadium's two pedestrian ramps at Gate D. Three deep in some areas, they whistled and jumped up and down. Then they began an obscenity-laced chant, demanding that the few women in the gathering expose their breasts.

Gabriele Stabile for The New York Times Men gather at the Gate D pedestrian ramp during last Sunday's game yelling vulgar chants to women to expose their breasts in what has become a halftime ritual at New York Jets home games.

When one woman appeared to be on the verge of obliging, the hooting and hollering intensified. But then she walked away, and plastic beer bottles and spit went flying. Boos swept through the crowd of unsatisfied men.

Marco Hoffner, an 18-year-old from Lacey Township, N.J., was expecting to see more. Not from the Jets — they pulled off a big upset over the Steelers. He wanted more from the alternative halftime show that, according to many fans, has been a staple at Jets home games for years.

The mood of previous Gate D crowds — captured on video clips posted on YouTube — sometimes bordered on hostile, not unlike the spirit of infamously aggressive European soccer hooligans. One clip online shows a woman being groped by a man standing next to her.

Sunday's scene played out for about 20 minutes, and at least one woman granted the men's request, setting off a roar as if the former star running back Curtis Martin had just scored a touchdown. Martin was actually nearby, being honored on the field in the official halftime show, which had a far less intense audience.

Throughout halftime, about 10 security guards in yellow jackets stood near the bottom of the circular, multilevel ramp, located beyond the stadium's concourse of concession stands and restrooms. One of the guards was smoking a cigarette; many fans do the same during halftime on the giant ramps, which are located at each corner of the stadium. Another guard later said they were not permitted to do anything about the chants at Gate D because of free speech laws. Yet when a reporter tried to interview two security guards after halftime, he was detained in a holding room, threatened with arrest and asked to hand over his tape recorder.

The New Jersey Sports and Exposition Authority, which provides security at Giants Stadium for Jets and Giants games, is aware of the raucous and raunchy halftime show. Patrick C. Aramini, the authority's vice president for security, parking and traffic for the Meadowlands Sports Complex, said men and women could be expelled and even turned over to the New Jersey State Police to be arrested for their participation — although he said he did not know if anyone was cited Sunday. He added that other measures, like blocking access to the ramps, were being considered.

"The problem is, you got to watch four or five hundred people sometimes in the one particular spiral," Aramini said.

"What do we do, arrest everybody that starts chanting?"

Such fan behavior is not uncommon at other sporting events in the United States, like Nascar races and the infield at the Kentucky Derby. There was even an infamous undressing in the National Football League's marquee event: during the 2004 Super Bowl halftime show, a "wardrobe malfunction" exposed Janet Jackson's right breast before a worldwide televised audience.

But the Gate D tradition at Giants Stadium apparently is unique to Jets games; the Gate D ramps are comparatively empty at Giants games. Perhaps forlorn Jets fans, who have rarely had a winning team to support, are seeking alternative entertainment on game days.

"This is the game," said Patrick Scofield, a 20-year-old from Poughkeepsie, N.Y., who has attended several Jets games the last two seasons.

Denisse Rivera, a 23-year-old from the Bronx, was on a first date Sunday. When she arrived at the crowd at Gate D, several men pointed at her, signaling men at all levels to chant in her direction. After a brief moment of hesitation, she flashed them. Then she took a bow.

"I don't care," Rivera said when told that video clips of previous incidents, taken ..phones, ended up online. "I love my body and I like what I have, so let everybody share it."

Two security guards soon approached Rivera. The guards warned her about indecent exposure laws, she said, and let her go.

Jets officials declined to be interviewed about the halftime tradition at their home games. In a statement, the team said: "We expect our fans to comply with all rules at the stadium, and the vast majority do. For those who don't, we expect and encourage N.J.S.E.A. security to take appropriate action."

Greg Aiello, an N.F.L. spokesman, said, "I would defer any comment to law enforcement and the people on the stadium authority there that are in charge of fan-conduct issues."

The State Police staffs every Jets home game. But Sgt. Stephen Jones, a spokesman, said the State Police did not make an attempt to prevent fans from congregating in Giants Stadium. But he said that there were incidents of fans throwing money into the center of the spiral ramps. Those fans then threw objects at children picking up the money. Access to the center of the ramps is now blocked off by a chain-link fence.

"Our emphasis is certainly not general security," Jones said. "Something like you're describing, the stairwell behavior, is a matter that the security would handle. Now if they come up with something where somebody needs to be arrested, the troops will go out there and affect that arrest."

Some parents are not pleased with the halftime activities away from the field.

Randall Lazzaro, a 40-year-old from New Jersey, attended Sunday's game with his wife and two sons, ages 6 and 9. He was at the base of Gate D shortly before halftime and said that cursing at games was probably the main reason parents did not want to take their kids to games.

When Lazzaro was told what was about to happen on the ramps at Gate D, he said, "That's a disgusting practice and the police have to get involved, put a stop to it."
on November 20, 2007