As evidenced in print and music, African Americans boast a lively verbal art tradition that includes tales, toasts, and adventures of bad guys who confront and vanquish any adversary instantly and guiltlessly. From Reconstruction to the jazz age through today, this boasting tradition has been a uniquely urban phenomenon.

"Toasts" are performed narratives of often urban but always heroic events. For many Blacks, both performers and audience, hearing about or performing the winning ways of the central character becomes as creative a release as Black music. Toasting is today's continuance of an oral tradition, but many contemporary toasters read their complicated and elaborate versions from a text. As with any oral tradition, many versions of the same toast exist. The toast is a dynamic performance within the Black community of recognizable and popular central characters. They are performed in bars, libraries, community centers, and even college campuses. However, less explicit toasts are performed by anyone at any time for entertainment.
A toast well known in any large American city with a significant Black population is "Shine and the Titanic." This toast relates the heroic efforts of an old Black stoker to warn of the ship's impending disaster, but when ignored, he strives to save himself. The Titanic sank on its maiden voyage in 1912, during the Jim Crow days when Blacks were not allowed as passengers.
Toasts are typical of other Black traditions, such as quilting and gospel, in that improvisation is highly valued. Therefore, one will find many different versions of any toast; many use profane street speech. This version of "Shine and the Titanic" heard by the author in Oakland, California, has been edited for publication.
In toasts, historical accuracy is not considered important. For instance, although in reality the Titanic sank in April, in the ballad it sinks in May. Audiences expect, accept, and appreciate the toaster's improvisations.
As is common in toasts, a narrator describes Shines's successful exploits, while Shine directly addresses the captain, his daughter, and the whale. Shine, the black stoker and hero of the toast, repeatedly warns the white captain of the impending disaster and humbly gives updates on the sinking ship. Even though Shine is ignored, hustled, and chased by a whale, he remains confident of his ability and determination. It is Shine alone who can save the day. 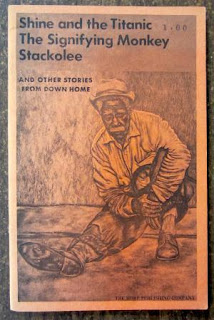