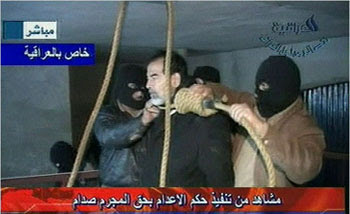 It is a very frightening precedent that the United States can invade a country on false pretenses, depose its leader and summarily execute him without an international trial or appeals process. This is about vengeance, not justice, for if it were the latter the existing international norms would have been observed. The trial should have been overseen by the World Court, in a country that could have guaranteed the safety of defense lawyers, who, in this case, were killed or otherwise intimidated.

The irony here is that the crimes for which Saddam Hussein was convicted occurred before the United States, in the form of Donald Rumsfeld, embraced him. Those crimes were well known to have occurred 15 months before Rumsfeld visited Iraq to usher in an alliance between the United States and Saddam to defeat Iran.

The fact is that Saddam Hussein knew a great deal about the United States’ role in Iraq, including deals made with Bush’s father. This rush to execute him had the feel of a gangster silencing the key witness to a crime.

At Nuremberg in the wake of World War II the U.S. set the bar very high by declaring that even the Nazis, who had committed the most heinous of crimes, should have a fair trial. The U.S. and allies insisted on this not to serve those charged, but to educate the public through a believable accounting. In the case of Saddam, the bar was lowered to the mud, with the proceedings turned into a political circus reminiscent of Stalin’s show trials.
on December 30, 2006