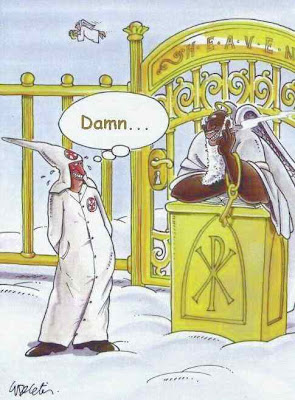 NEW YORK (AP) -- The Ku Klux Klan has rebounded by exploiting current hot-button issues, especially immigration, according to a new report released by the Anti-Defamation League.

The Klan, and other white supremacist groups like skinheads and neo-Nazis, grew significantly more active in the past year, holding more rallies, distributing leaflets and increasing their presence on the Internet -- much of it focused on stirring anti-immigrant sentiment, according to the report.

"Extremist groups are good at seizing on whatever the hot button is of the day and twisting the message to get new members," Deborah M. Lauter, ADL Civil Rights director, said Monday. "This one seems to be taking hold with more of mainstream America than we'd like to see."

"Klan groups have witnessed a surprising and troubling resurgence by exploiting fears of an immigration explosion, and the debate over immigration has, in turn, helped to fuel an increase in Klan activity, with new groups sprouting in parts of the country that have not seen much activity," Lauter said.

Old Klan chapters have been revived and new ones started throughout the South, historically the heart of the group, and in other places such as Michigan, Iowa and New Jersey, says the report.

Last May in Alabama, an anti-immigration rally included slogans such as, "Let's get rid of the Mexicans!" according to the document, titled "Ku Klux Klan Rebounds."

"The Klan is increasingly cooperating with other extremist groups and Neo-Nazi groups," Lauter said. "That's a new phenomenon."

Between 2000 and 2005, hate groups mushroomed 33 percent and Klan chapters by 63 percent, according to Mark Potok, director of the Southern Poverty Law Center, which tracks hate crimes.

Precise data are difficult to pin down, but Potok's group counts as many as 150 Klan chapters with up to 8,000 members nationwide. More than 800 hate groups exist around the country, Southern Poverty research shows.
Hate groups were fading in 1990s

In the late 1990s, memberships in such groups was crumbling as they lost leaders and struggled to organize, said Brian Levin, director of the Center for the Study of Hate and Extremism at California State University, San Bernardino. Many hit bottom around 2000.

"Whenever you think the Klan is down and out, they find another way to reinvent themselves," he said of the recent resurgence.

Historically, the Klan's focus had been to terrorize African-Americans -- through race riots, lynchings and other killings -- but it reached peak membership at more than 4 million in the 1920s by focusing on immigration.

Said Potok: "It's remarkable to look back at the nativist sentiments toward Catholics -- it's very similar to what we're seeing with Mexicans now."

Today, many white supremacists blame immigrants, particularly Hispanics, for crime, struggling schools or unemployment, for instance. With many Americans already divided on how to revamp laws and practices to address the nation's swelling immigrant communities, immigration "is an issue that works for hate groups," Potok said.
A burning cross on the front lawn

Many Latinos are feeling the effects firsthand. Last September, a Kentucky family originally from El Salvador found a wooden cross burning on their front lawn just weeks after they moved in.

Earlier last year, a Latino teenager in Houston was brutally beaten and sodomized while one attacker screamed "White Power!" The victim barely survived, and one attacker was sentenced to life in prison.

"I've been doing [Hispanic advocacy work] for a long, long time and the atmosphere has never been as poisonous as it has been in the last few years," said Lisa Navarrete, a vice president at the National Council of La Raza. "The level of vitriol is new."

"It was very well attended, unfortunately," Navarrete said.
on February 06, 2007