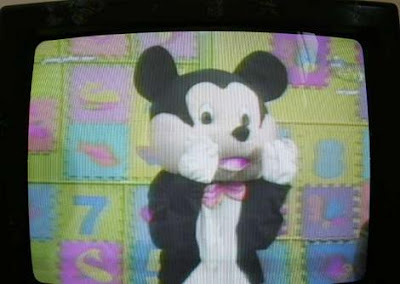 
A Palestinian TV station has killed off a controversial Mickey Mouse lookalike that critics said was spreading anti-US and anti-Israeli messages to children.

The Hamas-affiliated al-Aqsa channel aired the last episode on Friday, showing the character, Farfur, being beaten to death by an "Israeli agent".

Israeli critics had said the show was outrageous and some Palestinian ministers tried to get it shelved.

In the final broadcast an actor said to be an Israeli agent tries to buy the land of the squeaky-voiced Mickey Mouse lookalike.

Farfur brands the Israeli a "terrorist" and is beaten to death.

He was killed "by the killers of children", Saraa says.

The channel had ignored demands from Information Minister Mustafa Barghouti for the show to be stopped.

Mr Barghouti said it "was wrong to use a programme directed at children to convey political messages".

In an earlier show, Farfur had said: "You and I are laying the foundation for a world led by Islamists.