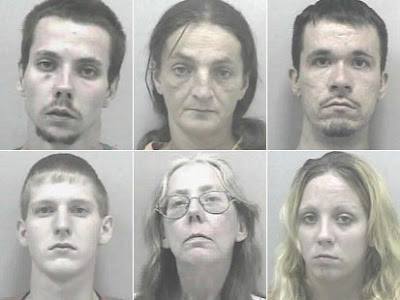 The photos provided by the West Virginia Regional Jail and Correctional Facility Authority shows 6 people who were arrested for holding a Charleston woman captive in a Big Creek home for at least a week, Sept. 9, 2007, in Logan, W.Va. The FBI is investigating whether the beating and sexual assault of this woman was a hate crime. From top left, Bobby Brewster, Karen Burton, George Messer, Danny Combs, Frankie Brewster, and Alisha Burton. (West Virginia Regional Jail)One of those arrested, Karen Burton, is accused of cutting the woman’s ankle with a knife. She used the N-word in telling the woman she was victimized because she is black, according to the criminal complaint.
Each time she was stabbed she was called N!gger.”The things that were done to this woman are just indescribable,” Logan County sheriff’s Sgt. Sonya Porter said.
Deputies found the 23-year-old victim Saturday after going to the home in Big Creek, about 35 miles southwest of Charleston, to investigate an anonymous tip. One of the suspects, Frankie Brewster, was sitting on the front porch and told deputies she was alone, but moments later the victim limped toward the door, her arms outstretched, saying, “Help me,” the sheriff’s department said in a news release.
on September 14, 2007

Email ThisBlogThis!Share to TwitterShare to FacebookShare to Pinterest
Labels: pzwxxpc