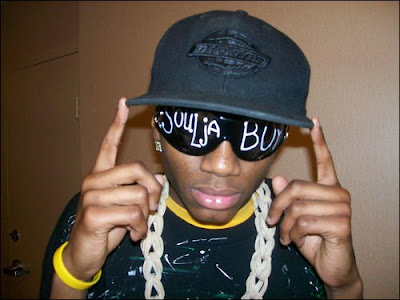 This is why I'm at war with ignorant rappers.....

One of the biggest songs in the country last year was an inane, sex-chant-infused Southern rap called "Crank That (Soulja Boy)," by young Soulja Boy Tell Em, from tiny Batesville, Mississippi, population 7,113. Soulja Boy Tell Em turned 18 this summer and is looking forward to voting for the first time. His monster hit song included repeated assertions of a cartoonishly absurd sex act: supermanning, or as he elaborated repeatedly in the song, "Superman that ho," which means to come on a woman's back and then put a sheet over her so it sticks to her back and she looks like she's wearing a cape. Ridiculous stuff. He also chants repeatedly, "Supersoak that ho," the meaning of which needs no explanation, given the neighborhood we're already in.

These are ludicrous suggestions that play into the Cro-Magnon conception of men using sex and sperm to attack and slay women. It's such a mean-spirited vision of sex that every time I heard the record I thought, I bet that before this came out, he was a virgin.

I asked him, "What historical figure do you most hate?" He said, "Shout out to the slave masters! Without them we'd still be in Africa."

Last week in Atlanta, I got to interview Soulja Boy Tell Em. I found out just how young he really is. He was one of about ten rappers I interviewed in one day for my BET show, The Black Carpet. I decided it'd be fun to give all the rappers part of the Proust questionnaire. I thought it'd be a way to get beyond image and into who they really are. Most of the guys gave good, thoughtful, intelligent, sensitive answers. I asked Juelz Santana, "How would you like to die?" He said, "Loved."

Then came Soulja Boy Tell Em. I asked him, "What historical figure do you most hate?" He was stumped. I said, "Others have said Hitler, bin Laden, the slave masters..." He said, "Oh wait! Hold up! Shout out to the slave masters! Without them we'd still be in Africa."

My jaw, at this point, was on the ground."We wouldn't be here," he continued, having no idea how far in it he'd stepped, "to get this ice and tattoos."

Wow. Never mind that diamonds come from Africa. Never mind that there were many generations of pain in between leaving Africa and getting diamonds. Never mind that the long-term cataclysmic effects of subtracting about tens of millions of young, strong people from Africa over the course of a couple of centuries is a large part of the reason why Africa now appears so distasteful to you. Never mind all that, Soulja Boy. You put country first.
on November 01, 2008

it really is shameful and ignorant and actually kind of scary that black people are still being niggers, what the white man wanted us to be....in 2008. This is the role model many of our children choose to look up to.