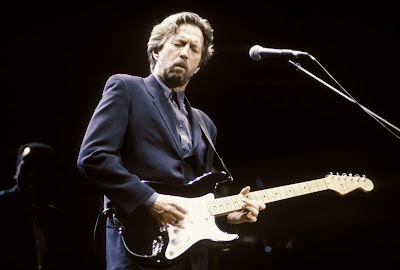 Besides the fact that I think he's an overrated copycat...this is why I'm not an Eric Clapton fan and never will be....


"Do we have any foreigners in the audience tonight? If so, please put up your hands. Wogs I mean, I'm looking at you. Where are you? I'm sorry but some fucking wog...Arab grabbed my wife's bum, you know? Surely got to be said, yeah this is what all the fucking foreigners and wogs over here are like, just disgusting, that's just the truth, yeah. So where are you? Well wherever you all are, I think you should all just leave. Not just leave the hall, leave our country. You fucking (indecipherable). I don't want you here, in the room or in my country. Listen to me, man! I think we should vote for Enoch Powell. Enoch's our man. I think Enoch's right, I think we should send them all back. Stop Britain from becoming a black colony. Get the foreigners out. Get the wogs out. Get the coons out. Keep Britain white. I used to be into dope, now I'm into racism. It's much heavier, man. Fucking wogs, man. Fucking Saudis taking over London. Bastard wogs. Britain is becoming overcrowded and Enoch will stop it and send them all back. The black wogs and coons and Arabs and fucking Jamaicans and fucking (indecipherable) don't belong here, we don't want them here. This is England, this is a white country, we don't want any black wogs and coons living here. We need to make clear to them they are not welcome. England is for white people, man. We are a white country. I don't want fucking wogs living next to me with their standards. This is Great Britain, a white country, what is happening to us, for fuck's sake? We need to vote for Enoch Powell, he's a great man, speaking truth. Vote for Enoch, he's our man, he's on our side, he'll look after us. I want all of you here to vote for Enoch, support him, he's on our side. Enoch for Prime Minister! Throw the wogs out! Keep Britain white!
o Quoted in Rebel Rock by J. Street. First Edition (1986). Oxford: Basil Blackwell. pp. 74-75. Street's sources are editions of the New Musical Express, Melody Maker and the Guardian and Times newspapers from the time.

(These statements were allegedly made on stage by a heavily drunk Clapton during a concert in Birmingham, UK, in 1976. Clapton is referring to British anti-immigration Conservative MP Enoch Powell. Clapton later made similar further comments to the audience later in the evening. Clapton has never denied making these statements and has refused to apologise for his remarks or distance himself from them, although he denies that his views are racist and states that he is merely an opponent of mass immigration. This incident was the main inspiration for the formation of Rock Against Racism).

* Clapton went into a rap about Enoch. His initial line was "Enoch's right - I think we should send them back." I don't think he said "nigger" he said "wogs". He definitely said, "Keep Britain White". Nobody cheered, but after he played another song, he did the same again. It was extraordinary - but he stood there being overtly offensive and racist. I was completely mystified as to why this man playing black music would behave this way."
o Author Caryl Philips, referring to the aforementioned Birmingham concert in 1976, at which Phillips was present. Quoted by author Robin Denselow in When The Music Stopped: The Story of Political Pop, Faber and Faber (1989), pp. 138-139.
on January 03, 2009