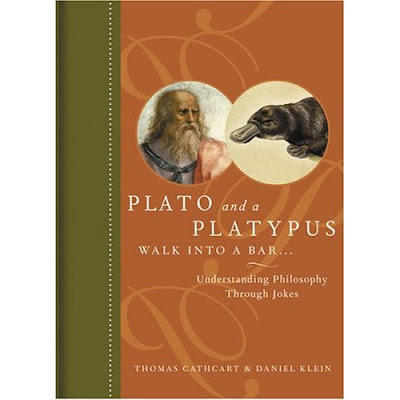 Here's a review of a book that I'm currently reading. The book is entitled "Plato and a Platypus Walk Into A Bar". Great book! -Papa Robbie

There’s a concept in Metaphysics called “emergence”. It is used to discuss, among other things, a mysterious process that make a collection of meaningless parts join together to become a being we recognize. For example, if arms, kidneys, fingernails, and even brains do not constitute a person without each other, what is the element that definitively unites them as human being.


Similarly, in Plato and a Platypus Walk Into A Bar, some kind of dorky jokes and some shallowly explicated philosophy emerge to become a rather charming and engaging collection that feels a bit like a warm fuzzy blanket for nerds, or anyone else who needs an excuse to laugh at relatively tame jokes. The philosophy of the book is easily understood in the small chunks, and in turn, it brings a bit of gravitas to a collection of delectable but completely cheesy jokes.
The philosophical concepts are neatly and lightly juxtaposed with jokes that successfully illustrate them. Part of the fun of the book is realizing just how much philosophy contributes to jokes we’ve already heard, but also makes a subtler point about how both philosophy and jokes attack the meaning of what it is to be human. Most people know that’s philosophy’s goal, but they may believe that fully grasping it is impossible. Many who feel that philosophy is not for them, or is incredibly esoteric, will be eased into by the realization that in fact, it’s as natural a commentary on our lives as humans as jokes about boobs are.


Perhaps what’s most essential about the book is not that it proves that philosophy is the impetus behind jokes, but that it proves that philosophy is like humor. The authors tend to match each paragraph or few paragraphs of philosophical inquiry with a joke that illustrates it. To borrow some formal logic, this seems to imply a causal relationships: If philosophy, then Jokes. But the truer explanation of what’s at work here is: If alive, then philosophy and/or jokes.

Even those of us who don’t consider ourselves great ponderers of the human condition may realize that in telling jokes, we’re subtly teasing ourselves into testing what it is we truly know. To be Buddhist-minded about it: life is tough. We need to find ways of getting ourselves through it, and for some that’s philosophy while for others, it’s humor. For readers of this book, it may likely be both.

To be fair (and state the obvious), it’s stronger as a book of jokes than it is as a collection of philosophy. You may find yourself reading and think, “Kant is easy! Everyone said Kant was hard to understand, but this is simple, cute and funny.” Well, caveat emptor: that joke about the doctor who can’t see the invisible man only touches the tip of the a priori ice berg.


The real genius revealed here lies not that which is in the mind of the German philosophers, but rather in the minds of the authors. Anyone with a rigorous understanding of the philosophical theories discussed will inevitably be impressed that Cathcart and Klein so adeptly made these fascinating and nearly abstract connections and juxtapositions. (Someone less educated might incorrectly assume that she now understands Kant.)


That being said, a philosopher (with a robust sense of humor) will probably get a good healthy laugh and even some food for thought based on their interesting method of tying together these two disparate methods of enquiry. In addition to some good jokes, there are a few legitimately engaging questions raised. For example, is a joke about a man who marries a woman based on the size of her breasts alone an anti-feminist joke, or an anti-chauvanist joke? Would new age philosophers be embarrassed or annoyed if they heard the joke about aliens stopping on earth to discover bagels—and recommending cream cheese?
In other words, the book, like philosophy and like most jokes, vacillates between sincerity and complete irreverence. However, it never feels irrelevant, and given that it’s sole topics are philosophy and jokes, that’s quite an achievement. The jokes become more important when couched in terms of philosophy, and the philosophy grows more contemporary because it’s described as the father of humor. Jokes feel smarter and philosophy feels easier.
Ultimately, humor, not philosophy, is the take home message. It’s obviously funny (almost giggle out loud funny) to imagine philosophy and jokes smushed together in the same book. It’s a philosophical idea as well, and as the authors are both philosophy majors, they no doubt recognize that humor can provide insight to philosophers.
But at the end of the day, while I wanted to retell all the jokes I read, even as a philosophy major myself, I was hard-pressed to remember any of the concrete ideologies. I half-jokingly said that I decided to read it because I thought it would prepare for me graduate school in the fall. While it did prepare me for school in that it affirmed my incredibly quirky tastes, it also reminded me of just how cavernous and complex philosophy can be. Ha.Ha.Ha.
on March 20, 2009