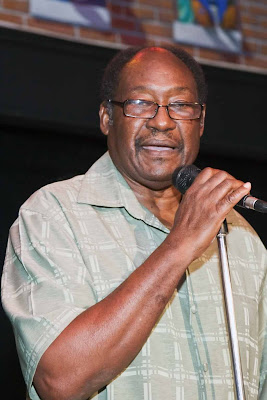 Today I had the opportunity to speak with a legendary rhythm & blues artist who hasn't received the respect that I think he deserves. We spoke for 45 minutes about various things...religion, politics & of course music. The brother is deep & I LOVE his music. He is one of the last of the real SOUL singers. GIVE HIM HIS PROPS!


He began singing tenor with The Genies, a vocal group in Long Beach, Long Island, who were offered a recording contract by the record producer, Bob Shad. Their first single, "Who's That Knockin'", reached #72 on the Billboard Hot 100 chart in 1958,[1] with Claude Johnson (later of the duo Don and Juan) on lead vocal. The group then moved to Atlantic Records, with Hammond taking over as lead singer, but their recordings were not released, and he was drafted into the Air Force.

When he returned to New York in 1965, Hammond organised a studio session to record his own song, "Shotgun Wedding", and released it under the name of Roy Hammond on his own Hammond label, before leasing it to the larger Black Hawk Records under the name Roy C. The record, with its novelty ricochet opening and relatively risqué subject matter for the time, reached #14 on the national R&B chart.[1] It had even greater success when issued in the UK, reaching #6 on the UK Singles Chart in 1966 and #8 when reissued in 1972.[2] His first album was That Shotgun Wedding Man (1966) on Ember Records.[1]

After some unsuccessful follow-ups on the Shout label, Hammond started another new label, Alaga. Working with guitarist J. Hines, he had more success with "Got To Get Enough (Of Your Sweet Love Stuff)" making the R&B charts in 1971. Two years later he signed for Mercury Records, and had another R&B hit with "Don't Blame The Man". He also released an album, Sex and Soul, and several more minor hit singles. He stayed with Mercury for several years, until label bosses took exception to his outspoken political stance in songs, like "Great Great Grandson of A Slave".[citation needed]

Since 1979 he has continued to release a string of soul singles and albums, on his own Three Gems record label, initially based in New York and later in Allendale, South Carolina. Hammond composed most of his recordings and has more than 125 titles to his credit.[1] He recorded an album by ex-Temptation Dennis Edwards entitled Talk to Me, and also worked on a CD by Bobby Stringer.[1] Hammond also runs his own record shop in Allendale, called Carolina Record Distributors.

In 1998, Shaggy sampled Roy C's "Love Me, Love Me" on the soundtrack of the movie, How Stella Got Her Groove Back.[1] Equally, Hammond released an album entitled Stella Lost Her Groove in March 1999.[3]

There is currently a documentary being made about Roy C. It is titled Roy C. Forever. For more information on the film visit: