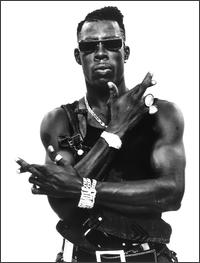 During his heyday, Shabba Ranks was arguably the most popular dancehall toaster in the world. He was a massive crossover success in the U.S., thanks to an openly commercial

hybrid of reggae and hip-hop, and also to prominent duet partners like Maxi Priest, Johnny Gill, and KRS-One. All of this brought him several hit singles and albums on the R&B charts in the early '90s, and made him the first dancehall artist to win a Grammy. Ranks' distinctive, booming growl of a voice earned him many imitators, and his sex-obsessed lyrics -- while drawing criticism for their unrelenting "slackness" -- made him one of dancehall's hottest sex symbols. Ranks' early success also helped pave the way for even bigger crossovers by artists like Shaggy and Sean Paul.

Shabba Ranks was born Rexton Rawlston Fernando Gordon on January 17, 1966, in Sturgetown, Jamaica. When he was eight years old, his family moved to the Kingston ghetto of Trenchtown, where Bob Marley had grown up. By age 12, he was fascinated by the sound system DJs who spun records in local clubs, and often chatted on the mic over the backing tracks. His early inspirations included Charlie Chaplin, General Echo, Brigadier Jerry, Yellowman, and especially Josey Wales. He soon tried his hand at performing as a toaster, and spent the early '80s working under Admiral Bailey at the Roots Melody sound system. Paired with a record selector dubbed the Navigator, Ranks initially called himself Co-Pilot. Under that name, he cut his first single, "Heat Under Sufferer's Feet," in 1985. He soon changed his name to Shabba Ranks, and caught the attention of his idol Josey Wales, who took the young toaster under his wing.

Wales introduced Ranks to some of the producers at King Jammy's studio, and Ranks soon began recording there, debuting with the single "Original Fresh." He collaborated with Chaka Demus, and recorded a large quantity of singles, none of which gave him a breakout hit. The 1988 single "Needle Eye Punany" marked the beginning of his notorious sexual explicitness, which he would soon ride to tremendous popularity in Jamaica. More crucial, though, was his move to King Jammy engineer/producer Bobby Digital's new studio and label, Digital B, in 1989. Having known each other for some time, the duo's chemistry was immediate, and Ranks quickly vaulted to stardom that year with a series of hit singles and an electrifying stage show (at one point, Ranks arrived on-stage via helicopter).

From 1989-1991, Ranks recorded some 50 singles, mainly with Bobby Digital but also with producers Gussie Clarke and Steely & Clevie. He scored hit after hit, including the massive "Wicked Inna Bed," "Roots and Culture," "Live Blanket," "Mama Man," and "Peeny Penny," among others. His album Rappin' With the Ladies featured covers of songs by female reggae artists, and gave him another big hit with a new version of J.C. Lodge's smash "Telephone Love"; it was also one of his first successes overseas, proving quite popular in the U.K. Gussie Clarke produced his 1989 LP Holding On, which spawned major hits in "Pirates' Anthem" (a collaboration with Cocoa Tea and Home T), "Twice My Age" (a duet with Krystal), and "Mr. Loverman" (a new version of Deborah Glasgow's "Champion Lover"). He also cut several other tracks with Cocoa Tea and Home T, including "Who She Love," "Stop Spreading Rumours," and "Your Body's Here With Me." A subsequent album, Golden Touch, proved to be another U.K. success.

Ranks' burgeoning popularity led to a major-label deal with Epic in 1991, and it was clear from the start that he aspired to crossover stardom. His Epic debut, As Raw as Ever, featured a high-profile duet with the then-hot Maxi Priest, "Housecall." "Housecall" made the Top Five on the R&B charts, sending As Raw as Ever all the way to number one on the R&B album listings. Another duet, "The Jam" -- this time with rap legend and reggae enthusiast KRS-One -- topped the hip-hop singles chart in 1992. As Raw as Ever was awarded a Grammy for Best Reggae Album, making Ranks the first dancehall artist ever to notch a win. Later in 1992, "Mr. Loverman" was re-released as a single in the States, following its appearance in the film Deep Cover; it went all the way to number two on the R&B charts. Ranks released his follow-up album, X-Tra Naked, the same year, and notched yet another duet hit with the Johnny Gill collaboration "Slow and Sexy," his third R&B Top Fiver. X-Tra Naked also featured other minor hits: "Muscle Grip," "Ting-a-Ling," and a duet with Queen Latifah, "What 'Cha Gonna Do?"; it also won Ranks his second straight Best Reggae Album Grammy. Ranks was so popular that two compilations of his earlier Jamaican hits, Rough & Ready, Vol. 1 and Mr. Maximum, both charted in the U.S. in 1992 as well.

1994 brought Ranks another decent-sized hit in the Addams Family Values soundtrack contribution "Family Affair," a rap/reggae version of the Sly & the Family Stone hit. He completed his third Epic album, A Mi Shabba, in 1995, and it produced several minor hits in "Ram Dancehall," "Let's Get It On," and "Shine Eye Gal." However, it didn't match the phenomenon of its predecessors, and Ranks fell mostly silent afterwards. He did return to Jamaica to record some more material for King Jammy during the late '90s, some of which was released on the hodgepodge album Get Up Stand Up in 1998. However, no new major-label offerings appeared, and Sony issued several compilations around the turn of the millennium.