Limbaugh Is a Large Piece Of Feces 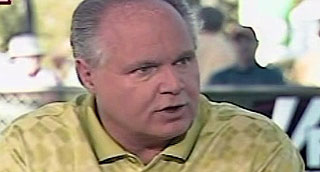 Someone please find this pill-popping Oedipus Rex and slap the taste out of his mouth!

On the August 23 broadcast of his nationally syndicated radio program, Rush Limbaugh suggested that the competition in a new season of CBS' reality TV program Survivor, in which contestants are reportedly divided into competing "tribes" by ethnicity, "is not going to be fair if there's a lot of water events." In support of this assertion, he cited a March 2 HealthDay article reporting that "young blacks -- especially males -- are much more likely to drown in pools than whites."

During the program, Limbaugh suggested that "people at CBS" are "scratch[ing] their heads" and asking whether "the swimming portion" of the new Survivor competition is "going to be fair." When pressed by an African-American caller to identify "[w]hich team ... would be the worst swimmers and why," Limbaugh stated that "the white tribe would be the best swimmers" based on the performance of white athletes at "the Olympics." After apparently disconnecting or cutting the volume level of the caller, Limbaugh said: "[Y]ou're saying I'm being racist because I'm saying blacks can't swim." He further protested: "I mentioned the swimming comment only because it's not going to be fair if there is a lot of water competition in this. It just isn't. It is not a racial or racist comment at all."

In support of his assertion that his comments were "not ... racist," Limbaugh cited a March 2 HealthDay article reporting that "young blacks -- especially males -- are much more likely to drown in pools than whites." But the study on which the HealthDay article was based did not address the swimming abilities of African-Americans in general. HealthDay reported that "[r]esearchers don't know why black kids are at higher risk of drowning," that "[m]ost of the black [drowning] victims ... drowned in public pools," and that "[t]he study didn't examine whether the victims had taken swimming lessons or whether the pools were supervised by lifeguards." Additionally, the article noted that according to the study, "people from poorer families were more likely to drown" -- "regardless of race," and that one author of the study suggested "[f]uture research" will be done to "examine whether swimming instruction reduces the risk of drowning."

Regarding the new Survivor series, Limbaugh also stated that there "are many characteristics ... that you would think would give [the African-American tribe] the lead, and the heads up in terms of skill and athleticism and so forth." He also stated that "our early money" is on "the Hispanic tribe" -- which he said could include "a Cuban," "a Nicaraguan," or "a Mexican or two" -- provided they don't "start fighting for supremacy amongst themselves." Limbaugh added that Hispanics have "probably shown the most survival tactics," that they "have shown a remarkable ability to cross borders" and that they can "do it without water for a long time, they don't get apprehended, and they will do things other people won't do."

Limbaugh also asserted that "the Asian-American tribe" -- whom he called "the brainiacs of the bunch" -- "probably will outsmart everybody," but while "intelligence is one thing ... raw, native understanding of the land -- this is probably why the Native Americans were excluded, because they were at one with the land and they would probably have an unfair advantage."

He added that "the white tribe," "if it behaves as it historically has," will "bring along vials of diseases" and "will wind up oppressing" the other tribes by "deny[ing] them benefits" and "property," but will later "try to put [the other tribes] on some kind of benefit program." He further asserted that if CBS "allows ... cheating" and "oppression," "then of course the white tribe is going to win."

Limbaugh's statements about the swimming abilities of people of African descent recalled recent comments by Tramm Hudson, a Republican candidate for a Florida congressional seat who stated that "blacks are not the greatest swimmers or may not even know how to swim." Hudson has apologized for his comments, calling them "stupid."

From the August 23 edition of The Rush Limbaugh Show:

LIMBAUGH: The new Survivor is actually a race between races, ladies and gentlemen. It premieres on September 14th. They're going to pit four tribes of people against each other: the African-American tribe, the Asian-American tribe, the Hispanic tribe, and the white tribe. And they are going to actually have a battle of races on the next Survivor. They know that it's going to be controversial. They know it's going to -- and people at CBS, behind the scenes, who just have heard about this, sort of scratch their heads -- say, "What the hell are we doing? What are we going to do -- the swimming portion, how is that going to be fair?"

LIMBAUGH: All right. Back now to this Survivor story: A race between races. In just a couple of weeks, the new season of Survivor will take 20 castaways to the Cook Islands -- the middle of the Pacific Ocean. They will be split into four tribes and they will compete against each other. The four tribes are these: the African-American tribe, the Asian-American tribe, the Hispanic tribe, and the white tribe. Noticeably absent here -- the Native-American tribe. But I guess they had a full boat, so to speak, when they have -- when they have 20.

So, you look at this and you say, "OK, here we are. We live in a society where we're not supposed to cause racial friction. We've been getting away from this, so we're all one, we're all the same." This is -- this is incredible. Now, we've got the Survivor series segregating contestants into tribes. Not even groups! We're calling them tribes. I don't know how many people still watch this show; I guess quite a few, because it's still on the air. You might cause riots on this show, or in the country as a result of this show. But here are the -- here are the tribes: the African-American tribe, the Asian-American tribe, the Hispanic tribe, and the white tribe. Now, of these four tribes, just off the top of your head, who do you think has the advantage? Who do you think here is going to win? Do you think it's going to be the white tribe? The Hispanic tribe? The African-American tribe? Or the Asian-American tribe? We've been looking at this here amongst ourselves, and our early money is going on the Hispanic tribe, providing they stay unified.

We don't know who makes up the -- I mean, we've got the names here of all these members of the tribes, but Hispanic encompasses a lot. You could have a Cuban in there. You could have a Nicaraguan. You could have a Mexican or two. You could have any number. And you know, if they start fighting for supremacy amongst themselves, that could lead to problems. But our early money is on them anyway, because these people have shown a remarkable ability, ladies and gentlemen, to cross borders, boundaries -- they get anywhere they want to go. They can do it without water for a long time. They don't get apprehended, and they will do things other people won't do. So, our money, early money, is on the Hispanics.

The white tribe, I have to tell you -- I don't have a whole lot of hope in the white tribe. The Asian -- the Asian-American tribe probably will outsmart everybody, but will that help them in the ultimate survival contest? Intelligence is one thing, but raw, native understanding of the land and so forth -- this is probably why the Native Americans were excluded, because they were at one with the land here, and they probably would have an unfair advantage.

The African-American tribe, tough to handicap on this one, because you just -- it's -- it's -- there are many characteristics here that you would think give them the lead and the heads up in terms of skill and athleticism and so forth. The Asians, as I say -- the brainiacs of the bunch. The Hispanic tribe -- they've probably shown the most survival characteristics of any -- What? What are you shaking your head about for? What are you -- well -- well, I don't know that CBS is going to let them get away with that. The -- we were talking about the white tribe. We're speculating among ourselves that if the white tribe behaves as it historically has, they will bring along vials of diseases; they will end up oppressing the other groups; they will deny them benefits; deny them their property, steal it from them, and you know, put them on some kind of a benefit program. The white tribe put everybody else on some kind of benefit program, but the benefit program, of course, will not be enough. There will be no education. The white tribe will not allow any health care.

CALLER: Go ahead and say it.

LIMBAUGH: If you would just let me answer the question I'd be happy to tell you. OK, who's gonna be the best swimmers in this group. Ah, put those African-Americans, Asian-American tribe, Hispanic, uh. Well, no, I'm -- looking at the Olympics, you'd have to say the white tribe would be the best swimmers.

CALLER: The Olympics. You're judging by world-class athletes?

LIMBAUGH: Yeah, you just look at the Olympics.

LIMBAUGH: Well, now, wait, wait a second, though. If the Hispanic tribe has a Cuban in it, those people swim 90 miles, you know, sometimes for freedom. So you know, you just never know. That's why you've got to watch the show.

CALLER: Right, well, I like the way you play around with that. And what you do is you tease the racism card throughout this nation right now. And of trying elevate it and say you know what --

LIMBAUGH: Look at this! I am playing the racism card! I'm telling you what a major network is doing in its prime-time schedule. They're pitting races against each other in this stupid Survivor format, and you tell me I'm being racist. [laughs]

LIMBAUGH: Now, I want to address one thing. I heard you, [caller]. You accused me in a sly way of being racist by making comments about who would win the swimming competition. I know what you're saying. You're saying I'm being racist, you're saying I'm being racist because I'm saying blacks can't swim. I have here a story, and I read this from HealthDay news. "One of the largest studies of its kind confirms that young blacks -- especially males -- are much more likely to drown in pools than whites. In fact, almost half of all recorded drowning deaths among people aged 5 to 24 are among blacks, according to the study in the American Journal of Public Opinion [sic: American Journal of Public Health]. Blacks are especially likely to drown in motel and hotel pools, while whites tend to drown in private pools." Now, I mentioned the swimming comment only because since this is known, this is not going to be fair if there is a lot of water competition in this. It just isn't. It is not a racial or racist comment at all. It's an example of how we're so tightly wound. And I am by no stretch am the first person to reference these studies and these facts.