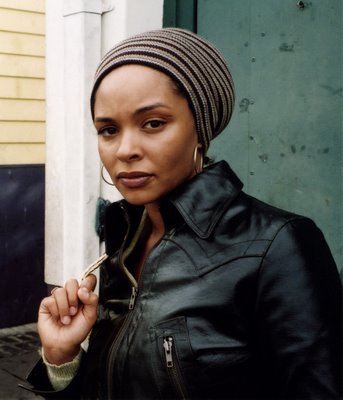 This sista is THE TRUTH!!! I've got her CD in regular rotation. She has everything that's missing from modern R&B. She has SOUL, thought-provoking lyrics, and GREAT music! Check her out!

Joy Denalane was born in Berlin-Schoeneberg as the third of six children to a German Mother and a South African Father. At the age of six the family moved on to Berlin-Kreuzberg, a more racially diverse part of the city, where Joy entered school and spent the greater part of her adolescence. At sixteen, she left home and began focusing on music. The name Denalane is South African and means shining star (in Pedi); it is as if the young teen had no other choice but to muster the courage and follow her predestined path to eventual celebrity. Equipped with a mixture of political awareness, nurtured by an upbringing heavy on education, and self-acquired street smarts, the ambitious teen hit the Berlin music scene, playing with local soul and reggae bands. As with most stellar figures, the very gifts that come to define them often prove to be the biggest obstacles in the beginning stages of their careers. And so it was for the young Joy Denalane as she struggled to harness her eclectic mix of influences and find her own voice. Despite her obvious singing talent, problems with coming into her own continued to plague her even during a brief stint with a major record company. But brighter things were soon to come. Thanks to a phone call made by her BMG A&R, Joy was invited to Stuttgart for a session with already established producers DJ Thomilla and Tiefschwarz. One of the songs that ensued would become her first chart success, the international club hit Music. Around the same time Max Herre, a Stuttgart native and front man of the band Freundeskreis, was looking for a female vocalist to accompany him on the song Mit Dir. They were introduced to one another and hit it off immediately. The songs refreshingly bashful love declaration resonated with listeners and became a Top Five hit in the summer of 1999. The chemistry to be heard on the track proved to be more than just musical as the two became a couple and first time parents the following year. Joy joined the FK Allstars (Max Herre, Afrob, Gentleman, Sékou Neblett, Déborah , Brooke Russell, Don Philippe,DJ Friction) and for the first time found herself in an artistic environment equally as divers as her own upbringing. Over the next two years (2000-2002) she toured rigorously with the group and developed her own distinct vocal style. She later signed with Four Music (a sub label of Sony Music) and began working on her first Solo Album Mamani. The Album, produced by Max Herre and released in 2002, debuted at number 8 in the German charts and spawned 4 singles (Sags Mir, Geh Jetzt, Was Auch immer and Im Ghetto Von maneuver their way through an array of genres and subject matters so wide ranging, Soweto). Mamani was able to attract a wide range of listeners with its ambitious mix of R&B, Soul, Jazz and Afro-Beat. Most artists would have struggled to but Joys delivery, now alternately reminiscent of Aretha, Letta MBulu and Mary J Blige, not only held Mamani together, but turned it into a milestone of German Soul. After numerous sold out tours, a live album accompanied by a DVD, a slew of national awards and nominations (Echo / VIVA Comet / 1 Live Krone) and world wide critical acclaim the undisputed Queen of German Soul (MTV) has completed her sophomore effort. The album entitled Born&Raised is more than just a follow up to Mamani; its a triumphant march to entirely new horizons. Not only has she matured musically and vocally, she has also opted to address an international audience by singing in English. Hints of things to come could be heard in Joys vocal contribution to Kanye Wests remix of Commons hit single Go, released in the summer of 2005. This newest work, Born&Raised, although musically more focused than its predecessor, manages to preserve the multiplicity and dynamism Joy Denalane fans have grown used to. Teaming up with husband/producer Max Herre as well as songwriter Sékou Neblett, a long time friend and colleague, Joy has crafted a true masterpiece. Born&Raised is a timeless mélange of late sixties soul, contemporary Hip Hop/R&B, Gospel, and heart felt ballads. The songs were recorded in Philadelphias famous The Studio and engineered by the internationally renowned Axel Niehaus. Vocal guest-features include the legendary Raekwon of the Wu Tang Clan, to be heard on Joys remake of his classic Heaven or Hell and Jay-Zs newest prodigy, Lupe Fiasco, on the socially critical Change. Musical contributions were made by keyboarder, James Poyser (Hammond B3); bassist and producer, Anthony Tidd; acclaimed horn players, Matt Cappy (tp) along with Jeff Bone Deep Bradshaw (tb); and the internationally celebrated arranger/composer, Larry Gold and a slew of the best musicians from New York and Philadelphia including guitar player Chris Sholar (Q-Tip, Stevie Wonder), drummer Steve Mckie (Bilal), bassist Josh David, vocalist Erika Hicks and keyboarder Junius Bervine (Musiq, D´Angelo, Antony Hamilton). It was producer Max Herres vision to record all of the musical tracks with live instruments, while preserving the simplicity and grit of sample based music. Through this approach instrumentals that had originally consisted of samples, such as contributions made by Kanyes mentor No ID or Jake One (De La Soul, G Unit), BAB Garde ( Frankfurt / Main ) could be arranged and altered at will. This progressive production concept, which further sets Born&Raised apart, was, by Maxs own account, tedious but well worth it. In the end Born&Raised is one of those rare works of art that is both tantalizing and familiar, an instant classic that one listens to over and over again, revealing a new side of its self each time.
on August 23, 2006