The Dogs Get Justice, But Women Don't.... 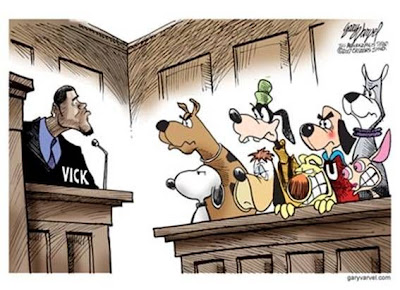 Football superstar Michael Vick is in big trouble for his role in a dog fighting ring. Sandra Kobrin agrees he's in the wrong, but wonders at the outrage deficit when it comes to the guys who beat their wives and girlfriends and stay in the game.

National Football League superstar Michael Vick is in trouble, serious trouble. Federal prosecutors charged the Atlanta Falcons' quarterback with animal abuse for his role as the alleged leader of a dog-fighting ring and, after denying it for months, Vick pleaded guilty on Monday. He faces stiff sentencing.

He's in big trouble with the NFL too, which has said he might never play professionally again. According to Gene Upshaw, executive director of the NFL's Player Association, "the practice of dog-fighting is offensive and completely unacceptable."

I just wish the NFL had the same outrage toward spousal abuse and other forms of domestic violence. But they don't. Not by a long shot.

Scores of NFL players as well as players from the National Basketball Association and Major League Baseball have been convicted of domestic abuse, yet they play on with no fear of losing their careers. Most pay small fines, if that, and are back on the field immediately.

The message is clear. Beat a woman? Play on. Beat a dog? You're gone.

Part of it is that it's the dog days of August--the notoriously silly season for news--so the Vick story has attracted tremendous press attention. But it's been all over TV as well during the past four months, since Vick's indictment in April.
Animal Lobby Attacks

The anti-animal abuse lobby, meanwhile, is going after Vick with all four paws.

PETA, People for the Ethical Treatment of Animals, which received almost $30 million in contributions last year, according to its Web site, and other animal rights organizations are demanding a boycott of companies that continue to sponsor Vick and are bombarding the NFL with letters demanding a no-tolerance policy when it comes to cruelty to animals by football players.

On blogs, the outrage continues on sackvick.net and other sites, with comments like "lets give #7, 7 to life," or "lets make Michael Vick into dog food."

A cottage industry of anti-Vick merchandise is out there. You can buy a chew toy for your dog in with a likeness of Vick, a "hang Vick" hat or even an eye-for-eye justice T-shirt that says "Stick Vick in the Pit."

Vick has already lost most of his sponsorship deals worth millions of dollars and he deserves to lose a whole lot more.

But the disproportionate punishment of Vick--while athletes who commit violence against women are let off the hook--has to be wondered at.

Might it be that domestic violence and spousal abuse is so pervasive in sports that it's simply too costly for leagues to suspend so many men? What would happen after all if those poor dear teams couldn't fill their rosters?
Numbers Are Astounding

The number of athletes arrested for domestic violence or spousal abuse is astounding.

A three-year study published in 1995 by researchers at Northwestern University found that while male student-athletes are 3 percent of the population, they represent 19 percent of sexual assault perpetrators and 35 percent of domestic violence perpetrators.

There are even Web site chronicles that treat the steady stream of offenders as if it were a joke. Check out badjocks.com or playersbehavingbadly.com. Maybe then again, don't. It's enough to make you sick.

Roger Goodell, the new NFL commissioner, has made it his mandate to crack down on athletes who misbehave.

In April Goodell introduced a new conduct policy that stiffens penalties and holds franchises responsible when their players get into trouble.

Jones had been arrested five times since he was drafted by the NFL in 2005 and has been involved in 11 separate police investigations. Most recently, during what amounted to a brawl at a strip club, he grabbed a stripper and banged her head into the ground. He will not be paid during his suspension and must apply for reinstatement.
Spousal Abuse Gets a Pass

But no one has been suspended in the NFL for spouse abuse or domestic violence, even though they've been arrested and convicted.

The NFL Players Association's Upshaw said in a statement: "We believe the criminal conduct to which Mr. Vick has pled guilty today cannot be condoned under any circumstances."

I say the NFL's indifference to the acts of domestic violence by other players cannot be condoned under any circumstances.

Last summer Philadelphia Phillies' pitcher Brett Myers assaulted his wife on a public Boston street and was charged with assault and battery. Major League Baseball did not penalize him, shrugging it off as an off-field incident. Are they saying a player needs to abuse his spouse during a game to get sanctioned? If so, just how does that work?

Don't expect anything better from the National Basketball Association.

Was he punished by the NBA? No.

The Sacramento Kings' Ron Artest was suspended last season for 72 games for fighting in the stands. In March he was arrested for domestic violence. For that he got what amounted to a hand slap; an immediate two-game suspension and a $600 fine for a player who makes several million a year.

Artest pled no contest to the domestic violence charge and was sentenced 100 hours of community service, a 10-day work project and mandated extensive counseling. The NBA did nothing here too. Maybe if he had committed the transgression on national TV--as with the fan brawl--more would have happened.

Maybe if he'd hurt a dog he would have been benched for the season.

Sandra Kobrin is a Los Angeles writer and columnist.
on August 23, 2007