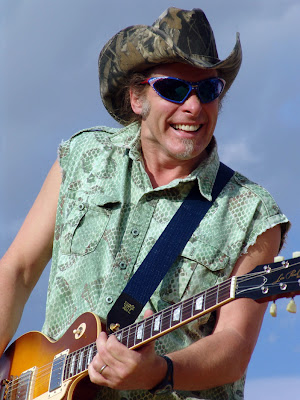 Is someone going to give this draft-dodging chickenhawk some serious crss-hair time? Please? This fool crapped & peed in his pants ...stayed in it for several days and then showed up when he was drafted into the military. Why? So they would just let him go home...Now he's a gun-toting, war loving bigot posing as a washed-up rocker.

"My being there (South Africa) isn't going to affect any political structure. Besides, apartheid isn't that cut-and-dry. All men are not created equal." - Detroit Free Press Magazine , July 15, 1990

(About Haiti) "We should put razor wire around our borders and give the finger to any piece of shit who wants to come here." - Westword Newspaper , Denver, Colorado, July 27, 1994

"[Ted Nugent's] conversations are peppered with the word nigger. He refers to his upcoming tour of Japan the Jap Whack Tour." - Detroit Free Press Magazine , July 15, 1990

"... And in my mind, I'm going why can't I just shoot this guy in the spine right now; shoot him in the spine, explain the facts of life to him... [Ted referring to an encounter with a Hare Krishna]" - WRIF-FM, Detroit, Ted Nugent as guest D.J., September 28, 1990

"About national health care: The government must stay out of my life. If there are weenies who are in the liability column of our nation, tough shit." - Westword Newspaper , Denver, Colorado, July 27, 1994

"Anybody that doesn't think it is better to blow someones brains out than to be raped, deserves to be raped! If you don't think your life is worth it then please go out there, don't wear any underpants and get RAPED!! Cuz you deserve it ..." - WRIF-FM, Detroit, Ted Nugent as guest D.J., September 23, 1991

"When other guys were getting high, I would grab a couple babes, go squirrel hunting and see just how mini mini-skirts could get." - Detroit Free Press Magazine , July 15, 1990

"... I met a couple of guys in line yesterday and they say write something to my girlfriend, she won't let me go hunting. I wrote her something, I wrote Drop dead bitch. What good is she, trade her in, get a Dalmatian, who needs her, the wench." - WRIF-FM, Detroit, Ted Nugent as guest D.J., September 25, 1991

About Hillary Clinton: "You probably can't use the term 'toxic cunt' in your magazine, but that's what she is. Her very existence insults the spirit of individualism in this country. This bitch is nothing but a two-bit whore for Fidel Castro." - Westword Newspaper , Denver, Colorado, July 27, 1994

And if you're a woman who feels that his lyrics to ditties such as the immortal 'Wang Dang Sweet Poontang' are sexist, Nugent says, 'Fuck you and go to a Garth Brooks show. Kiss my dog's dead, diseased, rotting ass. If you don't have a sense of humor, you're not allowed in Ted's world. I don't objectify women. I'd like to think that I'm optimizing their hardware.' - Westword Newspaper , Denver, Colorado, July 27, 1994

Ted Nugent has forked over $75,000 ... paying the price for shooting off his mouth ... Interviewed in late '92 on WRIF-FM ... he referred to Heidi Prescott (of The Fund for Animals) as a 'worhtless whore' and a 'shallow slut' and suggested 'Who needs to club a seal, when you could club Heidi?' Detroit Free Press , April 5, 1995

ON LAW AND ORDER

"I have a brain and I work that brain and it works and it knows the difference between right and wrong and it's got a thread of common sense. And that it's not Ted's opinion. It is how it is ... we're just working hard, playing hard and anybody that wants to get in our way does not deserve anything less than a bullet between the eyes ..." - WRIF-FM, Detroit, Ted Nugent as guest D.J., September 23, 1991

He claims that 30 days before his draft board physical, he stopped all forms of personal hygiene. The last 10 days, he ingested nothing but Vienna sausages and Pepsi; and a week before his physical, he stopped using bathrooms altogether, virtually living inside pants caked with his own excrement, stained by his urine. That spectacle won Nugent a deferment, he says. "... but if I would have gone over there, I'd have been killed, or I'd have killed, or I'd killed all the hippies in the foxholes...I would have killed everybody." - Detroit Free Press Magazine , July 15, 1990

..."unethical," says Mr. Caires, who was angered after he took Nugent out on a hunt in April. "He shoots at anything," Mr. Cairnes claims. "You should kill what you can use. He just likes to kill a lot of animals." (Cairnes is a hunting guide who takes people out to stab wild pigs in Hawaii) - The Wall Street Journal, July 25, 1995, 'Why Sit on the Beach When You Could Stab a Wild Pig?

Whacking is a term Nugent uses to describe what he does to his prey with bow and arrow. Whack 'em and stack 'em,' he says. - Detroit Free Press Magazine , July 15, 1990

Participants pay the Renegade Ranch (a fenced in, 300-acre canned hunting recreation area) for the animals they kill - anywhere from $500 for a wild boar to $5,500 for a six-point elk. Nugent tacks on a $250 fee for serving as celebrity guide. - Detroit Free Press Magazine , July 15, 1990

Ted Nugent's Down to Earth, promises raw, unedited footage of America's no. 1 rock 'n' roll bowhunter as he whacks 'em and stacks 'em. Nor was it hyperbole. In the first 10 minutes, viewers got bird's-eye of broadheads fatally piercing such fearsome creatures as an armadillo, a squirrel perched in a tree, some pigs and a goat. 'I love that part,' said the glinty-eyed Nugent after running death scenes in sequence. 'Let's see it again.' And the appalling whack 'em and stack 'em compendium ran all over in slow-motion replay. - The Washington Post , Recreation Section, September 23, 1990

"On my first bowhunt on the property a few years back, I was on my own for twenty-two days and killed an amazing thirty-three head of big game. I'm surprised I even came home. I was in heaven." - Ted Nugent's World Bowhunters Magazine, Volume 1/ Number 3, March/April 1990, p.15

"The first thing I do is be sure to cut the entire head off the animal I wish to bleach and/or paint Most butchers saw the skull plate off at the base of the antlers, thus eliminating the major skull section that we desire. Since I butcher most of my own deer and big game, I take special pride in the personal handling of all the precious by-products of my kills. I cut the head off at the base of the skull and begin the meticulous task of skinning and fleshing the entire skull down to the minimal meat and bare bone. I will actually scrape the remaining flesh from the skull bone with the edge of my knife blade, but stop short of taking any actual skull material. ... Hunt on. Kill on. Eat on. Paint on. Live on."
on August 30, 2007