In Bush we trust - or else 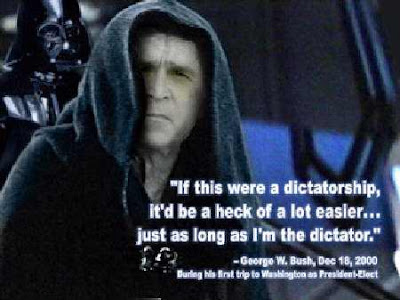 In Bush we trust - or else
By John Diaz

This far-reaching order of July 17 may be Bush’s most brazen defiance of the Constitution, which is no small feat for an administration that thinks it can set its own rules on electronic surveillance, torture, kidnapping, rendition, and the designation of “enemy combatants” who can be arrested on U.S. soil and held indefinitely without judicial review. This one is a frontal assault on the Fifth Amendment, which decrees that the government cannot seize an individual’s property without due process.

Under Bush’s executive order, the U.S. government has endowed itself with the authority to freeze the American assets of anyone who directly or indirectly assists someone who poses “a significant risk” of committing a violent act that has the purpose or effect of threatening the Iraqi government, the “peace and stability” of the country or the reconstruction effort.

The White House has claimed the order is targeted at people or groups that are helping the insurgents, particularly in Syria or Iran, but the language of the order is far broader than its stated intent.

The order’s liberal use of the word “or” and inclusion of the highly subjective term “significant risk” are particularly troubling in the hands of a White House that has suggested that domestic war critics are emboldening U.S. enemies in Iraq.

“On its face, this is the greatest encroachment on civil liberties since the internment of Japanese Americans in World War II,” said Bruce Fein, a constitutional lawyer who was a deputy attorney general in the Reagan administration and author of an article of impeachment against President Bill Clinton.

Fein said the sanctions against suspected violators would amount to “a financial death penalty.” The executive order not only calls for the freezing of assets of anyone who directly or indirectly aids our enemies in Iraq, it prohibits anyone else from providing “funds, goods or services” to a blacklisted individual. In other words, a friend or relative could have his or her assets seized for trying to help someone whose bank account is suddenly frozen. An attorney who offered legal help could risk of losing everything he or she owned.

The targets of the property seizures, even American citizens, would not be given any advance notice or opportunity to challenge the government’s action in court. The American Civil Liberties Union has noted that an order this sweeping could encompass “entirely innocent” activities such as an donations to humanitarian relief groups that indirectly provide what the U.S. government decides is “material support” to supporters of the insurgency.

“This order could have a serious chilling effect on charitable contributions intended to ease the suffering in Iraq,” said Michael German, ACLU national security counsel.

The Fifth Amendment was written for good reason: It’s dangerous to give the government unchecked authority to seize private property without judicial review. Our founding fathers knew that people in power were not always going to be reasonable or ethical - or competent.

One need look no further than the Transportation Security Administration’s “watch list” - which subjects passengers from a secret list to additional security screening - to see the margin of error. I know: I was among the many thousands of Americans who ended up on the TSA watch list for no apparent reason. I recently made a flight without being flagged for extra scrutiny, but I have no way of knowing whether I was lifted from the list or slipped through the cracks. The government refuses to say who might be on the list - or why.

Fein, who was in San Francisco last week, said latest executive order on Iraq continues a Bush administration pattern of “sneering contempt for the Constitution” that is unmatched in U.S. history. “These precedents, if unchallenged, lie around like loaded weapons,” Fein said. He reminds his fellow conservatives that Republicans will not occupy the White House forever.

“King George III,” observed Fein, “really would have been jealous of this power.”

The framers of our Constitution, however, would be appalled.

John Diaz is The Chronicle’s editorial page editor. You can e-mail at jdiaz@sfchronicle.com. You can hear one of his interviews with Bruce Fein at www.sfgate.com/ZNG.
on August 23, 2007