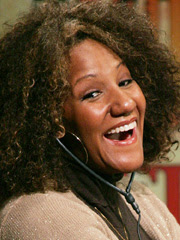 Karith Foster: Don Imus's New Sidekick Defends Her Decision to Be on the Show

Comedian Karith Foster talks exclusively to ESSENCE about her role on the Don Imus radio program, why she took the job and how she's not a sellout
By Tatsha Robertson

Months after Imus was fired from his job for calling the Rutgers women’s basketball team “nappy headed hos,’’ he’s back on the air, but this time with two Black comedians—Karith Foster and Tony Powell—at his side. Will it be back to business as usual for the famous radio talk show host, or will this new lineup really start an ongoing conversation on race in this country as he promised? ESSENCE news editor Tatsha Robertson caught up with Imus’s new sidekick Foster, a 33-year-old performer from Plano, Texas. In her first lengthy one-on-one interview, she talks about her new gig, her new boss and what she has to say to anyone who calls her a sellout.

Essence.com: Congratulations. Have you slept at all?

Karith Foster: (Laugh) I can sleep when I am dead.

Essence.com: What did your family say when they heard that you got the gig?

Essence.com: So they had questions?

K.F.: Of course. Absolutely. My parents are extremely protective. I am their firstborn. They have always done everything in their lives to help me have a better life and to keep me safe and happy, especially the whole safety issue. There are a lot of angry people out there, as it should have been.

Essence.com: What is it really like to work with Imus?

K.F.: He is one of the nicest guys you will ever meet. He does have the grumpy old man demeanor. I’m not saying that is not who he is. That is definitely part of who he is. But he is definitely a very kind, gentle person. If I hadn’t seen that side, if I wasn’t aware of that side, then I don’t think this would be a position I would have considered. Our very first discussion—ever—was about the Rutgers situation and what he had said and my feelings about it. I’ve been in the comedy business for about ten years, and you (develop) a gauge for people; you can tell who is BSing you after the show. This man was truly, genuinely sincere and regretful for the hurt that he caused people. In that conversation he said he always made it a policy not to make fun of celebrities’ children or public figures and so forth because that’s not fair. And that (his comment) was wrong.

Essence.com: Did he call you first? I’m just curious how this happened.

K.F.: It was being at the right place at the right time. It was arranged through a manager. I remember very vividly when everything happened because my uncle had just passed away that weekend when everything broke, and he (Imus) was meeting with the Rutgers women. I remember thinking, Wow, I just wish I had been there to be able to say something. It’s kind of like the universe heard me.

Essence.com: I hear what you’re saying, but someone out there will say that you were hired to save face for Imus. Your reaction?

K.F.: (Long pause) Well, I am not here to defend the man. I am also not paid to be his policeman. I am here to contribute to a historically entertaining show. I have no issue whatsoever speaking up when I feel the need to. I feel as if I am here to represent. That is another reason I took the job. What an opportunity to be a positive role model, not just for African-Americans and not just for women, but especially African-American women.

Essence.com: Are you going to hold him accountable when he goes too far? Because sometimes he does.

K.F.: Listening to it and having heard the actual recording of the nappy-headed hos (incident), it was so obvious it wasn’t malicious. He was an old White guy trying to be young and hip and use the modern vernacular. And it wasn’t funny.

Essence.com: Hmm… Your life is going to be open. How do you feel about that?

K.F.: Of course I am still taking it in. It’s something I think I planned for—for a while. Even in college I kind of lived my life as if I wanted to run for political office one day. I don’t want anything coming back to bite me in the butt. So I’m afraid there won’t be any Internet photos or kids popping up out of the blue.

Essence.com: There is some confusion. On your Web site you say you’re a Jewish woman, and so many people think you are Black and Jewish. Can you clear that up?

K.F.: Oh, my God! Okay, again humor. Some people get it and some people don’t. In my act I joke about being a Jewish girl from Long Island trapped in this body. I have very dear friends who are Jewish…so it’s kind of an inside joke.

Essence.com: I got it. In one of your skits, you say you were “ebonically challenged,’’ and it was funny. But some people may think you’ll say things Imus can’t.

K.F.: I am going to say what I feel. I am going to say what is true to me. I am certainly not up there to hurt or humiliate my people. I am reading some things online that are saying, “Oh, they hired two comedians.” It’s as if we are there just to be funny. The job of a comedian is also to provide social commentary and make people think. That is what I use my comedy for. I get up on stage and show another perspective. Part of what I had to fight my entire comedy career is that I don’t fall into the stereotype of the fat Black, sassy woman rolling her neck and talking about having baby daddies. Not that I have any issues with that because comedy is hard and anybody who has the balls to do it I applaud. I talk about being a Huxtable because that’s my experience growing up. Ebonically challenged—I grew up in Plano, Texas, where I was literally in an all-White production of A Raisin in the Sun. So I joke about it (Plano) having the ethnic diversity of a Klan rally.

Essence.com: Do you think this is a dream job for you?

K.F.: This is only my second day on the job. I don’t want to go crazy (Laughs). I do see it as an opportunity. It’s definitely a turning point. If God didn’t want this for me, it wouldn’t have happened. If I couldn’t handle it, then someone else would have gotten the job. That’s how I see it.

Essence.com: Okay, last question. Someone is going to call you a sellout. What do you have to say about that?

K.F.: Absolutely. I weighed that and thought about that. What outweighed that is when I thought about what good I can do. If people would call me a sellout, I’d have to say they don’t know me at all, and I am sorry they feel that way. I would hope and prefer they would see this as an opportunity to have a form of representation where there previously was none.