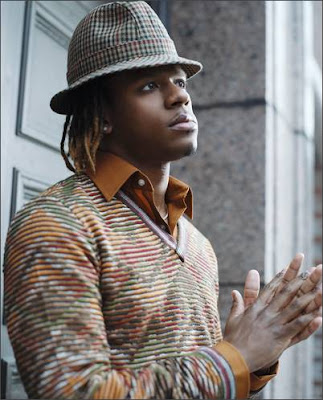 Ryan Shaw is a man with a mission.

This 26-year-old singer/songwriter from Decatur, Georgia is out to revive the passion and soul of the Golden Age of Rhythm & Blues (1960-1972) for a new generation. His debut album, This Is Ryan Shaw, combines a powerfully expressive voice with a clutch of great songs both classic and new—and a state-of-the-art, in-your-face sound that makes it impossible to sit still.
Working with player/producers Jimmy Bralower and Johnny Gale, Ryan dug deep into the "soul mine" for overlooked gems by obscure artists like the Combo Kings and the Sharpees along with more familiar songs made famous by Wilson Pickett, Jackie Wilson, and Bobby Womack. Ryan's original tunes—"Nobody" (the first single), "We Got Love," and "Over and Done" —are most definitely of the moment but built on the old-school values of strong melodies and meaningful lyrics.

Ryan delivers every song with the kind of emotional commitment and vocal panache that have nearly vanished from the mainstream musical landscape. Compositional craft and studio technology blend in an album of irresistible appeal from the opening dance blast of "Do the 45" to the heart-wrenching ballad "I Am Your Man" and "Over and Done," the upbeat Ryan Shaw original that closes the set on a joyful, triumphant note.

On stage, Ryan brings it all together with a combination of Southern warmth and New York vitality. Using just a small rhythm section and two male backing vocalists, he's able to effectively reproduce the sound of his album while stretching some tunes into full-on vocal rave-ups. Ryan's thrilling voice and charismatic presence are all that he needs to get over with an audience. There's no posturing or mindless booty-shaking, no need for contrived antics: Ryan Shaw is the real deal.
Courtesy of
http://www.thisisryanshaw.com