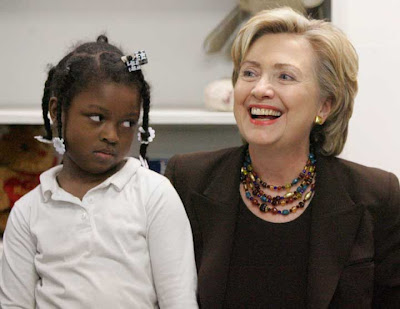 Employing innuendo and half-truths against Sen. Barack Obama, Sen. Hillary Clinton and her husband, the former President, have introduced the politics of personal destruction to the Democratic presidential campaign. They bear responsibility for cheapening the tone of the contest.

Sen. Clinton began distorting Obama's record in Monday night's debate and yesterday began airing a television attack that twists a recent Obama statement about former President Ronald Reagan to the point of clear inaccuracy. Bill Clinton, meanwhile, has wrongly accused Obama both of injecting race into the debate and of running a negative campaign against his wife.

They have gone well beyond engaging in tough political jousting while steering the campaign far from the substantive issues. Their tactics are reminiscent of the unproductive, distasteful mudslinging that started with Bill Clinton's election and continued through George W. Bush's reelection.

Sen. Clinton has an obligation to restore her competition with Obama to the level of fairness that has generally prevailed for the past year. And Bill Clinton should heed the counsel of Democratic elders, including Sen. Ted Kennedy, Rep. Rahm Emanuel and former Sen. Tom Daschle, who have called on him to cease fire.

This is not to say that Obama deserves a pass from scrutiny and criticism. Nor is it to endorse him as the better of the two candidates. It is only to express distress that the Clintons have crossed the line into attacks that raise questions about how she might campaign were she the Democratic nominee and how she might govern were she elected to the Oval Office.

She is indulging in the partisan-style politics that Americans are desperate to leave behind and certainly don't want in a President. And she is either giving free rein to, or failing to control, her husband. Neither possibility bodes well.

In one attack in the debate, Sen. Clinton accused Obama of helping a corrupt Chicago businessman with his "slum landlord business." The truth is that Obama had put in five hours of work as a junior law firm associate helping to represent a community organization that had partnered with the businessman. The truth is also that Obama fought slumlords as a community organizer.

In the debate, Sen. Clinton also charged that Obama had said that he "really liked the ideas of the Republicans," and she amplified the allegation in her TV ad, suggesting that Obama might support "special tax breaks for Wall Street" and refuse to raise the minimum wage.

And then yesterday Bill Clinton cynically claimed that he and Sen. Clinton are merely defending themselves against a rival who had gone negative and had played the race card. But the truth, as voters have plainly seen, is that Obama has run a unifying campaign free of invective. And the Clintons should know better.