Winston McGarland Bailey, HBM, DLitt (4 October 1941 – 23 October 2018), better known by his stage name The Mighty Shadow or Shadow, was a calypsonian from Tobago.


Bailey was born in Belmont, a suburb of Port of Spain in Trinidad, but grew up in Les Coteaux, Tobago, with his grandparents. He started singing calypsos at the age of 8.
At the age of 16 he moved back to Port of Spain, where for a time he was homeless while trying to establish himself. In 1970 he performed as part of the chorus in Mighty Sparrow's 'Young Brigade' calypso tent, and by the following year he had begun to establish himself as a calypsonian in his own right. He chose the stage name "Shadow" (he didn't use "Mighty" himself) after coming across some workmen digging a road while he was walking. One of the workmen was in a hole below the road surface and the others were calling him "Shadow", and Bailey said: "I felt like they was calling me". In his early years he performed wearing all black, with a large hat covering part of his face.
The Guardian newspaper, speaking of Shadow's stagecraft, argued that he had "a persona and outlook that stood in dramatic contrast to the classic bravura of the typical calypsonian, one that might have been expected to generate either bemusement or scorn in his native Trinidad and Tobago", and yet noted that on the contrary his stage presence and music "proved so original, so eerily amusing and so engaging that [he] quickly came to be hailed as one of the greats".
He won the Road March in 1974 with "Bassman" (where he also placed second with "I Come Out to Play") by a record margin, and won again in 2001 with "Stranger", making him the competition's oldest winner. He won the Calypso Monarch contest in 2000 with "What's Wrong With Me" and "Scratch Meh Back". His music used bass more prominently than most calypsonians, of which he said "I did 'Bassman', then I started to use melodic bass lines, not like they used before, and when I performed in the calypso tents in the early days, I had one extra sheet of music, just for the bass." Shadow is also known for his unique dance in which he jumped to the tempo of his music in "skip-rope style" with both feet in the air at the same time.
He was the second calypsonian to win both the International Soca Monarch and the Trinidad Road March competitions simultaneously, a feat he accomplished in 2001 with "Stranger". He rivaled fellow calypsonians Mighty Sparrow and Lord Kitchener after winning the Road March in 1974.
Shadow is the subject of Christopher Laird's 2017 film King from Hell, featuring concert performances and an interview.
He died on 23 October 2018 at the age of 77 at Mount Hope Hospital in St. Joseph, after suffering a stroke two days earlier. 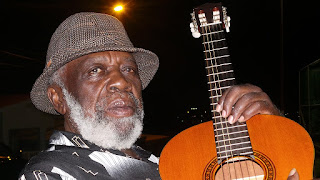