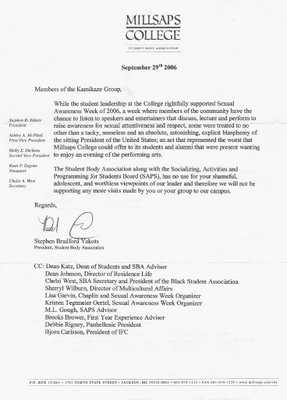 The latest target is Jackson, Miss., rapper Kamikaze, who was recently banned by student representatives at Mississippi's Millsaps College after he criticized the war in Iraq during a performance.

Kamikaze, one-half of rap group Crooked Lettaz with David Banner, was invited to speak and perform at Millsaps as part of the college's sexual awareness week.

During an interlude in his set, the rapper made comments about current U.S. president George W. Bush, infuriating members of the audience.

"I prefaced it by saying 'I know that a lot of you, or some of you, won't agree with what I'm saying and you're entitled to your opinion, as I am entitled to mine'," Kamikaze told AllHipHop.com. "There is a real strong Young Republican contingent at this school."

In his speech, the rapper accused Bush of pursuing oil and engaging America in a senseless war in Iraq, and also insisted that the government lied to start the war.

"The Bush thing was a piece of it [but] the other part was 'get out and vote,'" Kamikaze reasons. "The end of it is what probably pissed the Young Republicans off. I was like 'you guys need to register to vote, so next November we can get somebody in office that's not like Bush. I feel like an orangutan could run the country better than Bush right now.'"

Kamikaze, whose latest single "U Sked" is featured on NBA Live 2007, added that his show was profanity-free, although some members of the crowd did yell 'f**k Bush' at one point.

According to him, however, members of the Young Republican Party later complained about the show. He received a letter from Millsaps College the next day, chastising him for his comments on President Bush.

In the letter, Student Body Association president Stephen Bradford Yakots stated, "While the students at the college rightfully supported sexual awareness week at the college…some were treated to no other than a tacky, senseless and an absolutely astonishing, explicit blasphemy of the sitting President of the United States; an act that represented the worst that Millsaps College could offer to its students and alumni that were present, wanting to enjoy an evening of the performing arts. The Student Body Association and the Socializing Activities and Performing for Students Board (S.A.P.S.) has no use for your shameful, adolescent and worthless view point of our leader and therefore will not be supporting any more visits made by you to our campus."

Yakots was not available for comment at press time.

Foley, who was founder and co-chair of the Congressional Missing and Exploited Children's Caucus, served six terms in Congress.

Investigators believe he repeatedly emailed the boy, making conversation and seeking pictures, which the boy said "freaked me out."

While Kamikaze admitted that the Foley scandal had nothing to do with the comments he made about Bush on Sept. 28, he claimed the boycott was rife with hypocrisy.

"They're trying to be so holier than thou, and they have to be married with the 2.5 kids and go to church every week, when they know when they get home and get on their computer, they're emailing young boys, and they're pedophiles," Kamikaze told AllHipHop.com. "It's just crazy to see the hypocrisy that exists within politics.

"Me and Banner came into this game and we always said we were going to use music to make some kind of change. We have always put something socially related into it," he continued. "And whenever we have a crowd in front of us, we address. If you have fans that you have that you can influence in one way or another, it's an obligation for you to say something. We have to let folks know we aren't up here to just rap. We are artists who are concerned with what's going on in our communities. Anytime I do a show, I am speaking on social issues.
Courtesy Of AllHipHop.com
on October 03, 2006