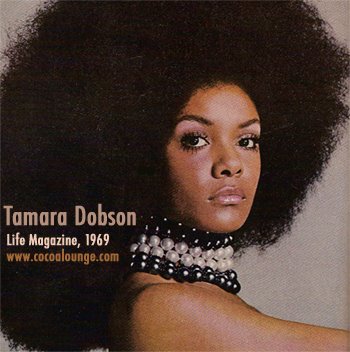 Tamara Dobson, the Baltimore-born model-turned-actress best known for her leading role in two films as kung fu-fighting government super-agent Cleopatra Jones, died Monday at Keswick Multi-Care Center from complications of pneumonia and multiple sclerosis. She was 59.

One of four children of a beauty shop operator and railroad clerk, Miss Dobson was a graduate of Western High School. She studied fashion illustration at the Maryland Institute College of Art and had her first modeling job there in its annual fashion show.

Miss Dobson caught the eye of a Hutzler's department store executive who encouraged her to pursue a modeling career, used her in several local shows and introduced her to New York designer Bill Blass, according to a 1969 article in the old Sun Magazine.

The article, headlined "Tomboy To $60-An-Hour Model," told how she was able to spend part of the school year in New York through the college's work-study program, with a job as an illustrator for a men's store there and modeling on the side. The piece also noted that she had enrolled in acting classes on the advice of a friend, actor Sidney Poitier.

She appeared in magazines including Vogue, Essence and Mademoiselle, was on the cover of Redbook and posed for a fashion spread in Ebony magazine with her hair in an Afro. She was seen in television commercials and served as the face of Faberge's "Tigress" for several years. She also appeared in ads for Chanel and Revlon.

Her film career began in 1972 with a small role in Fuzz as the girlfriend of the "deaf man" villain played by Yul Brynner.

Her big break came the next year when she was cast in the title role of Cleopatra Jones, the first black super-heroine in the "blaxploitation" genre -- a striking, fierce and fashion-conscious spy.

She reprised the role in 1975, in Cleopatra Jones and the Casino of Gold.

At 6 feet 2 inches tall, Miss Dobson was at one time recognized by the Guinness Book of World Records as the tallest leading lady in film, according to publicist Shawn Taylor with the Chicago-based Beaman Inc., which announced her death yesterday on behalf of the Dobson family.

"She was not afraid to start a trend. She designed a lot of the clothing that so many women emulated. With the knowledge from her degree and her natural creativity, she helped develop elegant fashions, especially for tall women," her brother, Peter Dobson of Houston, said in the announcement.

Miss Dobson continued to work throughout the late 1970s and early 1980s.

Miss Dobson lived most of her adult life in New York, where she and tennis great Arthur Ashe were the first two African-Americans to reside at the Carnegie House Condominiums, her family said.

Diagnosed six years ago with multiple sclerosis, she had been living the past two years at Keswick, according to the publicist.

"It was tough going through that debilitating disease, especially with her athleticism and involvement in karate," her brother said. "That was something she had to fight, and that fight was horrendous -- and being a proud individual, the fight was even harder for her."

Plans for a memorial service at Union Baptist Church in Baltimore were incomplete yesterday.

Survivors also include a sister, Darilyn Dobson of Baltimore.
on October 05, 2006