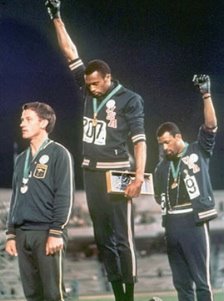 Olympians Tommie Smith and John Carlos made history on this day 38 years ago during the 1968 Summer Olympics in Mexico City, Mexico by protesting the oppression and injustices leveed against African-Americans by the United States by lifting black gloved fists (symbolizing Black Power), wearing no shoes and black socks (symbolizing poverty) and wearing bands around their necks (symbolizing lynchings) while on the medal stand for their 1st and 3rd place finishes in the 200 meters.

A beautiful statue stands on the campus of San Jose State University commorating this event.

When Fists are Frozen: The Statue of Tommie Smith and John Carlos

by Dave Zirin
Trepidation should be our first impulse when we hear that radical heroes are to be immortalized in fixed poses of bloodless nostalgia. There is something very wrong with seeing the toothy, grinning face of Paul Robeson staring back at us from a stamped envelope. Or the wry expression the US Postal service affixed on Malcolm X - harmless, wry, inviting, and by extension slanderous.

These fears erupted in earnest when I heard that San Jose State University would be unveiling a statue of two of its alums, Tommie Smith and John Carlos. The 20 foot high structure would be a commemoration of their famed Black Gloved salute at the 1968 Olympics in Mexico City. I dreaded the thought that this would be the athletic equivalent to Lenin's Tomb: when you can't erase a radical history, you simply embalm it.

These fears are not without foundation. Smith and Carlos's frozen moment in time has been consumed and regurgitated endlessly by the wide world of corporate sports. But this process has taken place largely without any kind of serious discussion about who these men were, the ideas they held, and the price they paid.

With palpable relief, I report that the statue does Smith and Carlos justice, and then some. It is a lyrical work of art, and a fitting tribute to two amazing athletes who rose to their moment in time. Credit should go to the artist, a sculptor who goes by the name Rigo23. Rigo23's most important decision was to leave Smith and Carlos's inventively radical and little discussed symbology intact. On the statue, as in 1968, Smith and Carlos wear wraps around their necks to protest lynching and they are not wearing shoes to protest poverty. Rigo23 made sure to remember that Carlos' Olympic jacket - in a shocking breach of etiquette - was zipped open, done so because as Carlos said to me, "I was representing shift workers, blue-collar people, and the underdogs. That's why my shirt was open. Those are the people whose contributions to society are so important but don't get recognized."

The most controversial aspect of the statue is that it leaves off Australian silver medalist Peter Norman altogether. This seems to do Norman a disservice considering that he was not a passive player in 1968 but wore a solidarity patch on his Olympic jacket so the world would know which side he was on.

But Rigo23 did this, over the initial objections of John Carlos, so people could climb up on the medal stand with Smith and Carlos and do everything from pose for pictures to lead speak-outs. Norman who traveled to the unveiling ceremony from Australia endorsed the design wholeheartedly understanding that its purpose is less to mummify the past than inspire the future. "I love that idea," said Norman. "Anybody can get up there and stand up for something they believe in. I guess that just about says it all."

Perhaps the main reason the statue is so good, so different, from things like Martin Luther King, Jr. shot glasses and Mohandas Ghandi mouse pads, is that it was the inspiration not of the school's Board of Trustees but a group of students who pushed and fought for the school to pay proper respect to two forgotten former students that epitomized the defiance of a generation.

And, fittingly, the day of the unveiling was not merely a celebration of art or sculpture but a bittersweet remembrance of what Smith and Carlos endured upon returning to the United States, stripped of their medals and expelled from Olympic Village. Smith recalled, "The ridicule was great, but it went deeper than us personally. It went to our kids, our citizen brothers and our parents. My mother died of a heart attack in 1970 as a result of pressure delivered to her from farmers who sent her manure and dead rats in the mail because of me. My brothers in high school were kicked off the football team, my brother in Oregon had his scholarship taken away. It was a fault that could have been avoided had I turned my back on the atrocities."

Carlos also said, "My family had to endure so much. They finally figured out they could pierce my armor by breaking up my family and they did that. But you cannot regret what you knew, to the very core of your person, was right."

But it was also a day to speak explicitly about the challenges of the future and not turning living breathing struggles into a history that is an inanimate as a hunk of marble. "Will Smith and Carlos only be stone-faced amidst a beautiful plaza?" speaker Professor Ethel Pitts-Walker asked the crowd. "For them to become immortalized, the living must take up their activism and continue their work."

Peter Norman said, "There is often a misunderstanding of what the raised fists signified. It was about the civil rights movement, equality for man....The issues are still there today and they'll be there in Beijing [at the 2008 summer games]and we've got to make sure that we don't lose sight of that. We've got to make sure that there is a statement made in Beijing, too. It's not our part to be at the forefront of that, we're not the leaders of today, but there are leaders out there with the same thoughts and the same strength." But the last word went to Tommie Smith, proud of the past but with an understanding of the challenges in the future. "I don't feel vindicated," Smith said. "To be vindicated means that I did something wrong. I didn't do anything wrong. I just carried out a responsibility. We felt a need to represent a lot of people who did more than we did but had no platform, people who suffered long before I got to the victory stand...We're celebrated as heroes by some, but we're still fighting for equality." Fittingly, when it came time to unveil the statue, the Star Spangled Banner was played -as a symbol of "how far we've come" since 1968. There was one problem: the curtain became snagged on the statue's raised fists. In the wake of Hurricane Katrina, we need our anti-racist history and our anti-racist heroes now more than ever. We need more fists gumming up the works.
on October 16, 2006

Gee, nobody called you a nihilist for posting about this anniversiary.....some friends I got...