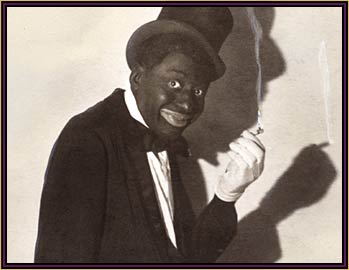 Like it or not, the precious First Amendment right to free speech gives every one of the hip-hop minstrels currently being hyped by cynical record labels and television execs a constitutionally protected right to act like complete jackasses before a national audience.

It also gives the rest of us the right to speak up and denounce such buffoonery as what it is: a direct throwback to the days of burnt cork and blackface, when fortunes were made from America's seemingly bottomless appetite for demeaning images featuring black folks shuffling, cutting up, dancing jigs and generally behaving like fools.

As recently pointed out by Byron Crawford, a blogger for the hip-hop magazine XXL, industry-backed racial clowning is so popular that it now constitutes its own subgenre: minstrel rap.

"Record labels are rushing out to sign the most coon-like Negroes they can find," Crawford wrote, citing the popularity of "Chain Hang Low," a song by a St. Louis teenager named Jibbs that is all the rage on the record charts and on YouTube, the online video service.

The song is an anthem to flashy jewelry set to the tune of "Turkey in the Straw" (Do your chain hang low? Do it wobble to the flow?/ Do it shine in the light? Is it platinum? Is it gold?).

As a New York Times music critic recently noted in a review of Jibbs' song, "Turkey in the Straw" is actually an altered version of a 19th-century minstrel song called "Old Zip Coon" (Ole Zip Coon he is a natty scholar/ For he plays upon de Banjo "Cooney in de hollar").

Jibbs is neither the first nor the biggest star in the world of minstrel rap. 50 Cent's album and movie "Get Rich or Die Tryin'" carry an unmistakable echo of a hit minstrel song from 1856 called "Root Hog or Die" - a tune based on a folk saying that carries pretty much the same meaning as 50's title. Even the lyrics barely need tweaking to sound like modern minstrel rap: (I'm right from old Virginny with my pocket full of news/ I'm worth twenty shillings right square in my shoes/ It doesn't make a dif of bitternance to neither you nor I/ Big pig or little pig Root, hog or die).

Other modern minstrel rap tunes include "Chicken Noodle Soup" and "Fry That Chicken," both of which have videos showing kids dancing little jigs while grinning and eating soul food.

It's sad to see musically untrained youngsters shucking and jiving for a bit of money and fame. Most could never dream of succeeding in a serious artistic setting like a church choir, dance ensemble or jazz band, places that require study, discipline and hard work. Many would be swiftly laughed off the stage.

Those who think that trafficking in racial selfabasement for cash is a harmless business should remember the controversial, tragic career of Lincoln Perry, whose stage and movie performances as Stepin Fetchit - a mumbling, dimwitted servant billed as "the Laziest Man in the World" - were popular in the 1920s and '30s.

Perry's minstrel act made him a millionaire movie star, but he ended up bankrupt, condemned by black audiences and all but forgotten by the time of his death in 1985.

Today's minstrel rappers are unwittingly racing down that same path - fooled by false financial promises, too lazy to hone their talent and condemned, like all who ignore history, to repeat it.
on October 22, 2006

While I agree with your central thesis, I am disheartened by the "too lazy to hone their craft" comment. I do not believe you have any idea if that is the case. It is Ok for you to not like the content and musical value of what they produce, but to call them lazy is also not fair.
Nevertheless, I have enjoyed your blogs and commentary.

Ummmm, Roberto....I didn't write it (NY Daily News published it). And if that shufflin'and bullshit took hard work to come up with, it's even sadder. I'm a musician, and I know shit when I hear it. It's easy to cater to the lower vibrations. The cerebral MCs get over-looked. I see NOTHING wrong with what the article said.

"Rap" is clearly a continuation and evolution of the minstrel. It's only slightly updated however, as it relies on all the standard formulas of the genre in its more classic form. The 'zip coon' charachter is obviously embodied in the 'thug' charachter - a flashy, superficial, ridiculously dressed 'negro', whose speach patterns make black people look ignorant (compare the speach patterns of rappers with the classic zip coon charachter, and you can see the similarities).
Of course both the 'thug' charachter and classic zip coon are violent, always carrying a switch blade or gun.
However, the behaviour of many black athletes causes me great concern, especially boxers, football players and basketballers. Watch the classic minstrel jigs that many will do after a touchdown, or the buffoonery that they will perform when they camera focuses on them on the sidelines.

I totally agree with this article. The sad thing is that people who have never lived in a prominently black or Hispanic lower class neighborhood think that "rappers" like Gucci Mane, Mario, Three Six Mafia, etc. are a valid representation of inner city life and culture. I was lucky enough as a kid to know both sides of the tracks and know hacks and fakers when I see them. It also disturbs me that people in my neighborhood idolize idiots like Gucci Mane when just 10 years ago the Wu Tang Clan were rapping about real city living and had a large amount of talent to back it up instead of relying on false imagery and materialism to get popular. It also sends the wrong message to white suburban kids who actually think that entertainment like this is OK.