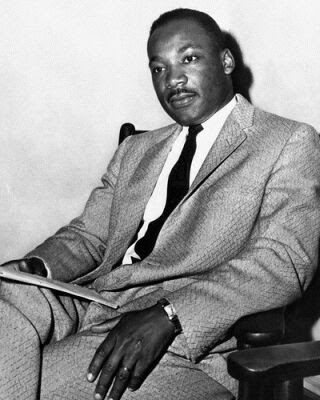 Behind all the Kumbaya-ism in this federal holiday is a prophetic preacher who talked not just about race, but about war and poverty.

"We cannot remain silent as our nation engages in one of history's most cruel and senseless wars. During these days of human travail we must encourage creative dissenters. We need them because the thunder of their fearless voices will be the only sound stronger than the blasts of bombs and the clamor of war hysteria." - Rev. Martin Luther King Jr.


Martin Luther King Jr. Day: A paid federal feel-good holiday in which America congratulates itself on how "far" we've come since the good ol' days of unchallenged white supremacy, traditionally celebrated with "Keep the Dream Alive" exhortations and Negro spirituals.

Though King's dream speech is recognized as a watershed moment in the history of U.S. race relations, the post-King era, in which my generation (and today's youngins) came of age, has made its own unwitting contributions: hip hop and 9/11 political rage, which is inextricably linked to the xenophobia swirling around the "illegal immigrant debate."

Hip hop has integrated the cultural landscape that today's youth roam. And 9/11 made Arabs and Muslims America's new niggers -- the target of blanket stereotypes, hypocritical moral scrutiny, and even open attack.

Behind all the Kumbaya-ism is the relevant King -- the prophetic preacher who talked about, not just race, but war and poverty.

Yes, it's true that King apparently pulled a Jayson Blair on a college paper. He wasn't always faithful to his wife and because of his rough, stubbly facial hair, he used shaving lotion that stank so bad, he had to douse himself in Aramis aftershave to make himself smell like a King again.

And have you seen that famous picture of King, taken just moments after he was shot in the neck on the balcony of the Lorraine Motel? Two of his aides are kneeling next to his limp body, pointing in the direction of where they thought the shot had been fired.

If that picture had been taken just a few seconds earlier, it would have captured King with a cigarette in his hand. One of King's aides removed the cigarette before it could be photographed.

While haters point to these things as proof that King is unworthy of adulation, it had the opposite effect on me, similar to my reaction when I discovered Thomas Jefferson owned and fathered slaves. I was inspired because King (and Jefferson) were no longer mythical gods but flawed human beings who achieved greatness. That means ordinary people like me could do extraordinary things, despite fundamental flaws.

One King question I do share with Reagan-Bush admirers, though -- why did Ronald Reagan sign the bill that made King's birthday a federal holiday?

The great African-American preacher Charles "the Harvard Whooper" Adams raised the question during a 1998 sermon at the celebrated Riverside Church.

As Michael Eric Dyson quotes Adams in his very relevant King biography, "I May Not Get There With You: The True Martin Luther King, Jr.," the holiday bill was passed by essentially the same Congress, "and signed by the same President, that had refused to pass a new civil rights bill in the 1980s."

These lawmakers are the same folks, Adams went on to say, that "refused to demand the immediate release of Nelson Mandela; ... devastated the Civil Rights Commission; amputated the legs and arms of the Equal Employment Opportunity Commission; cut off necessary support systems for the poor ... polluted the air, destroyed jobs; (and) carried on an illegal war in Nicaragua."

"Now why did Ronald Reagan sign that bill? Could it be that Mr. Reagan understood that the ease-ee-est way to get rid of Martin Luther King Jr. is to worship him? To honor him with a holiday that he never would have wanted -- to celebrate his birth and his death, without committing ourselves to his vision and his love. It is easier to praise a dead hero than to recognize and follow a living prophet."

And here's the kicker: "the best way to dismiss any challenge is to exalt and adore the empirical source through which the challenge has come."

Amen, Rev'run Adams. Forget King worship. Be your own King and let them hear the thunder of your fearless voice.

Sean Gonsalves is a Cape Cod Times staff reporter and a syndicated columnist.
on January 15, 2007