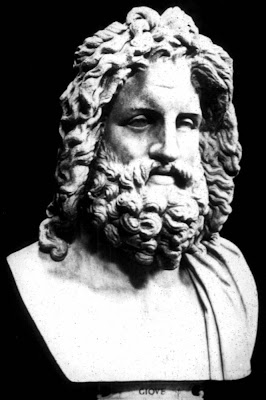 ATHENS, Greece (AP) -- A clutch of modern pagans honored Zeus at a 1,800-year-old temple in the heart of Athens on Sunday -- the first known ceremony of its kind held there since the ancient Greek religion was outlawed by the Roman Empire in the fourth century.

Watched by curious onlookers, some 20 worshippers gathered next to the ruins of the temple for a celebration organized by Ellinais, a year-old Athens-based group that is campaigning to revive old religious practices from the era when Greece was a fount of education and philosophy.

The group ignored a ban by the Culture Ministry, which declared the site off limits to any kind of organized activity to protect the monument.

But participants did not try to enter the temple itself, which is closed to everyone, and no officials sought to stop the ceremony.

Dressed in ancient costumes, worshippers standing near the temple's imposing Corinthian columns recited hymns calling on the Olympian Zeus, "King of the gods and the mover of things," to bring peace to the world.

"Our message is world peace and an ecological way of life in which everyone has the right to education," said Kostas Stathopoulos, one of three "high priests" overseeing the event, which celebrated the nuptials of Zeus and Hera, the goddess of love and marriage.

To the Greeks, ecological awareness was fundamental, Stathopoulos said after a priestess, with arms raised to the sky, called on Zeus "to bring rain to the planet."

A herald holding a metal staff topped with two snake heads proclaimed the beginning of the ceremony before priests in blue and red robes released two white doves as symbols of peace. A priest poured libations of wine and incense burned on a tiny copper tripod while a choir of men and women chanted hymns.

"Our hymns stress the brotherhood of man and do not single out nations," said priest Giorgos Alexelis.
More than a mere re-creation

For the organizers, who follow a calendar marking time from the first Olympiad in 776 B.C., the ceremony was far more than a simple re-creation.

"We are Greeks and we demand from the government the right to use our temples," said high priestess Doreta Peppa.

Ellinais was founded last year and has 34 official members, mainly academics, lawyers and other professionals. It won a court battle for state recognition of the ancient Greek religion and is demanding the government register its offices as a place of worship, a move that could allow the group to perform weddings and other rites.

Christianity rose to prominence in Greece in the fourth century after Roman Emperor Constantine's conversion. Emperor Theodosius wiped out the last vestige of the Olympian gods when he abolished the Olympic Games in A.D. 394.

Several isolated pockets of pagan worship lingered as late as the ninth century.

"The Christians shut down our schools and destroyed our temples," said Yiannis Panagidis, a 36-year-old accountant at the ceremony.

Most Greeks are baptized Orthodox Christians, and the church rejects ancient religious practices as pagan. Church officials have refused to attend flame ceremony re-enactments at Olympia before the Olympic Games because Apollo, the ancient god of light, is invoked.

Unlike the monotheistic religions of Christianity, Judaism and Islam, the old religion lacked written ethical guidelines, but its gods were said to strike down mortals who displayed excessive pride or "hubris" -- a recurring theme in the tragedies of Euripides and other ancient writers.

"We do not believe in dogmas and decrees, as the other religions do. We believe in freedom of thought," Stathopoulos said.

Copyright 2007 The Associated Press. All rights reserved.This material may not be published, broadcast, rewritten, or redistributed.
on January 21, 2007