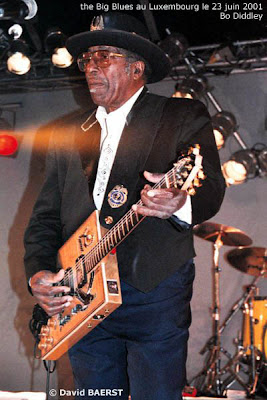 Everyone that knows me knows how much I love Bo Diddley's music. He died a few days ago and the coverage has been almost non-existent. The man was a pioneer who never got his due and the media barely acknowledged his influence on popular music. This is a major pet-peeve of mine. There are so many pioneers that get very little recognition while the copy-cats get the shine. Little Richard, Chuck Berry, Jerry Lee Lewis, and Fats Domino are still with us...but I feel like these American IDLE loving people will never have a clue....


Bo Diddley's funeral rocked and rolled Saturday with as much energy as his music.

For four hours, friends and relatives sang, danced and celebrated the life of the man who helped give birth to rock and roll with a signature beat that influenced Buddy Holly, Elvis Presley, the Rolling Stones and many others.

As family members passed by the Rock and Roll Hall of Famer's casket, a gospel band played his namesake song. Within moments, the crowd of several hundred began clapping in time and shouting, "Hey, Bo Diddley!"

Diddley, 79, died of heart failure Monday at his home in nearby Archer.

"In 1955 he used to keep the crowds rocking and rolling way before Elvis Presley," Diddley's grandson, Garry Mitchell, said before kicking his legs sideways, high up in the air, the way Diddley did onstage. Mourners cheered.

"I'm just telling it the way it is," Mitchell said.

Diddley, who was born Ellas Bates and became Ellas McDaniel when he took the last name of a cousin who raised him, was remembered for much more than his songs. Friends recounted his generosity, manifested in concerts for the homeless and work with youth groups and other charities; and the way he loved to talk to just about anybody he met.

Gainesville Mayor Pegeen Hanrahan referred to one of his most famous hits as she told the crowd, "When the question is asked, 'Who do you love?', it's you, Bo."

The funeral was followed by a tribute concert featuring his touring band and other musicians.

Eric Burdon, leader of the rock group The Animals, attended the service, and flowers were sent from musicians including Jerry Lee Lewis, Tom Petty, George Thorogood and others.

Burdon, also a member of the Rock Hall, called Diddley a big influence.

"I've been a fan of his since 16, 17 years of age. Probably one of the first records I ever owned," Burdon said, recalling that his attention was immediately grabbed when he saw an album cover with Diddley sitting on a scooter with a square guitar.

Burdon said he saw Diddley play last year at a concert in Australia, and even though he could tell his health wasn't great, Diddley put tremendous energy into the show. He was known for his stage moves, which some presume influenced Presley.

"He's always been jumping around and very aggressive; if he was onstage with the Stones, he was obviously putting Keith Richards in his place," Burdon said. In describing the "shave and a haircut, two bits" rhythm Diddley made famous, Burdon said, "I call it bone music, because it goes to your bone."

But stories of another side of Diddley were told repeatedly at the funeral. A man who loved God and his family, who would always stop to talk in the grocery store and was always smiling.

His brother, the Rev. Kenneth Haynes of Biloxi, Miss., said Diddley always asked how he could help and what he could give.

"There was one thing he wouldn't give me. That's his hat," Haynes said, referring to the black hat the musician was also known for.

But Haynes said his brother grew weary of life on the road.

"'But this is what God gave me to feed my family,'" Haynes recalled Diddley saying. "'I have to keep doing it until God says it's enough.'"

Diddley was born in McComb, Miss. He moved to rural Archer in the early 1980s and had a recording studio on his 76 acres. Mitchell joked that Diddley got up so early, he would tap the roosters on the shoulder to wake them up. And he always sang at breakfast.

Diddley's friend Roosevelt Hutchinson described how the musician would wrap meat in several layers of tin foil, bury it and light a fire on top to cook it. Once the fire was lit, he would grab his guitar.

"He just enjoyed playing that thing under those trees," Hutchinson said.

"Please know this, because I know Diddley," the guitarist's business manager, Faith Fusillo, told his family. "As much as you loved him, he loved you more."
on June 07, 2008

I think you and I can both agree that beyond being an innovator and an electrifying performer, Bo was just plain cool as all get out.