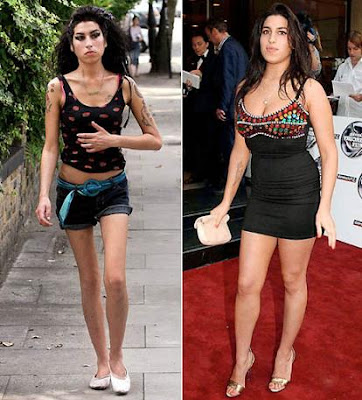 Addiction is an ugly thing...

The Sunday Mirror quoted Mitch Winehouse as saying that Amy has early stage emphysema and an irregular heartbeat, and has been warned that she will have to wear an oxygen mask unless she stops smoking drugs.

"The doctors have told her if she goes back to smoking drugs, it won't just ruin her voice, it will kill her," Mitch Winehouse was quoted as saying. "There are nodules around the chest and dark marks. She has 70 percent lung capacity."

Winehouse, 24, collapsed at her north London home Monday after signing autographs for a group of fans and was taken to a London hospital for tests. She remained there all week.

She is still scheduled to sing at a concert in London on Friday celebrating the 90th birthday of Nelson Mandela, the South African Nobel Prize-winner, and plans to take part in the Glastonbury music festival the following day.

Mitch Winehouse said it would be good for his daughter to perform.

"When she's been inactive work-wise then that's when the problems really start. The doctors have said that medically there isn't any reason why she can't do Glastonbury," the paper quoted him as saying.

He also pleaded with her drug-taking friends to stay away from her.

"What hope does she have if people are taking drugs around her," he said.

Chris Goodman, spokesman for Amy Winehouse, said "If that's what Mitch says, that's what he says. It sounds right."

Mitch Winehouse could not immediately be reached for comment.
on June 22, 2008

I love Amy winehouse's music she has an amazing voice.So sad what them drug's have done to her hope she gets strong enough to over come them. Interesting blog. jah bless you an yours