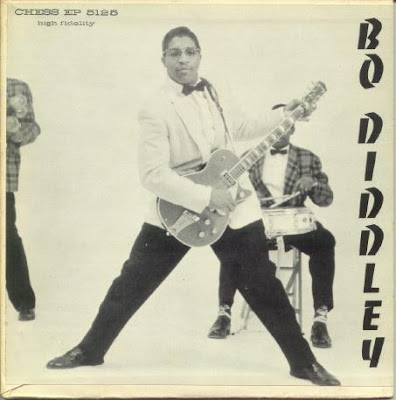 I grew up listening to this man....You don't know happiness until you've heard "Bo's Bounce" and "Mumblin Guitar"


JACKSONVILLE - Bo Diddley, a founding father of rock 'n' roll whose distinctive "shave and a haircut, two bits" rhythm and innovative guitar effects inspired legions of other musicians, died Monday after months of ill health. He was 79.

Diddley died of heart failure at his home in Archer, Fla., spokeswoman Susan Clary said. He had suffered a heart attack in August, three months after suffering a stroke while touring in Iowa. Doctors said the stroke affected his ability to speak, and he had returned to Florida to continue rehabilitation.

The legendary singer and performer, known for his homemade square guitar, dark glasses and black hat, was an inductee into the Rock and Roll Hall of Fame, had a star on Hollywood's Walk of Fame, and received a lifetime achievement award in 1999 at the Grammy Awards. In recent years he also played for the elder President Bush and President Clinton.

Diddley appreciated the honors he received, "but it didn't put no figures in my checkbook."
"If you ain't got no money, ain't nobody calls you honey," he quipped.

The name Bo Diddley came from other youngsters when he was growing up in Chicago, he said in a 1999 interview.

"I don't know where the kids got it, but the kids in grammar school gave me that name," he said, adding that he liked it so it became his stage name. Other times, he gave somewhat differing stories on where he got the name. Some experts believe a possible source for the name is a one-string instrument used in traditional blues music called a diddley bow.

His first single, "Bo Diddley," introduced record buyers in 1955 to his signature rhythm: bomp ba-bomp bomp, bomp bomp, often summarized as "shave and a haircut, two bits." The B side, "I'm a Man," with its slightly humorous take on macho pride, also became a rock standard.

The company that issued his early songs was Chess-Checkers records, the storied Chicago-based labels that also recorded Chuck Berry and other stars.

Howard Kramer, assistant curator of the Rock and Roll Hall of Fame in Cleveland, said in 2006 that Diddley's Chess recordings "stand among the best singular recordings of the 20th Century."

Diddley's influence was felt on both sides of the Atlantic. Buddy Holly borrowed the bomp ba-bomp bomp, bomp bomp rhythm for his song "Not Fade Away."

Diddley was also one of the pioneers of the electric guitar, adding reverb and tremelo effects. He even rigged some of his guitars himself.

"He treats it like it was a drum, very rhythmic," E. Michael Harrington, professor of music theory and composition at Belmont University in Nashville, Tenn., said in 2006.

Many other artists, including the Who, Bruce Springsteen, George Michaels and Elvis Costello copied aspects of Diddley's style.

Growing up, Diddley said he had no musical idols, and he wasn't entirely pleased that others drew on his innovations. "I don't like to copy anybody. Everybody tries to do what I do, update it," he said. "I don't have any idols I copied after."

"They copied everything I did, upgraded it, messed it up. It seems to me that nobody can come up with their own thing, they have to put a little bit of Bo Diddley there," he said.

Despite his success, Diddley claimed he only received a small portion of the money he made during his career. Partly as a result, he continued to tour and record music until his stroke. Between tours, he made his home near Gainesville in north Florida.

"Seventy ain't nothing but a damn number," he told The Associated Press in 1999. "I'm writing and creating new stuff and putting together new different things. Trying to stay out there and roll with the punches. I ain't quit yet."

Diddley, like other artists of his generations, was paid a flat fee for his recordings and said he received no royalty payments on record sales. He also said he was never paid for many of his performances.

"I am owed. I've never got paid," he said. "A dude with a pencil is worse than a cat with a machine gun." In the early 1950s, Diddley said, disc jockeys called his type of music, "Jungle Music." It was Cleveland disc jockey Alan Freed who is credited with inventing the term "rock 'n' roll."

Diddley said Freed was talking about him, when he introduced him, saying, "Here is a man with an original sound, who is going to rock and roll you right out of your seat."

Diddley won attention from a new generation in 1989 when he took part in the "Bo Knows" ad campaign for Nike, built around football and baseball star Bo Jackson. Commenting on Jackson's guitar skills, Bo Diddley turned to the camera and said, "He don't know Diddley."

"I never could figure out what it had to do with shoes, but it worked," Diddley said. "I got into a lot of new front rooms on the tube."

Born as Ellas Bates on Dec. 30, 1928, in McComb, Miss., Diddley was later adopted by his mother's cousin and took on the name Ellis McDaniel, which his wife always called him.

When he was 5, his family moved to Chicago, where he learned the violin at the Ebenezer Baptist Church. He learned guitar at age 10 and entertained passers-by on street corners.

By his early teens, Diddley was playing Chicago's Maxwell Street.

"I came out of school and made something out of myself. I am known all over the globe, all over the world. There are guys who have done a lot of things that don't have the same impact that I had," he said.
on June 02, 2008