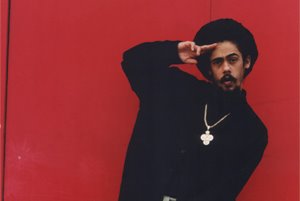 When “Welcome To Jamrock” erupted onto airwaves and blew apart iPods halfway through 2005 it came as a shock to some—but not to Damian “Jr Gong” Marley. The song is about the farthest thing from commercial music offerings today—an outraged and unapologetic description of the poverty and “political violence” ravaging his homeland of Jamaica—but “Welcome To Jamrock” hit—and hit hard—because it’s the sound of truth and the result of years of work to bring that truth to light. “I spent a lot of time thinking and this is the fruit of that labor,” explains the youngest child of the musical Marley family.“The song might be a ‘success’ so why be blind to that? But success can’t surprise given the time put into it.”

Jr Gong has been honing his skills—not so quietly—for some time. He made noise early on with 1996’s Mr Marley, and his major label debut Halfway Tree showcased a unique gift for blending hard-hitting reality rhymes and an uncommonly eclectic musicality; with a classic reggae sensibility at its core and run through with streams of hip-hop, r&b and dancehall, the album resonated with urban tastemakers and won a Grammy for Best Reggae Album in 2001. (“A Grammy in reggae is good,” he observes. “But it will be great to see reggae win Album Of The Year…it’s not about one man shut off from the rest of the crabs in the barrel.” So while slow-burners like “It was Written” and “Educated Fools” became club classics, Jr Gong was laying the groundwork for the tracks that would become Welcome To Jamrock—an album that was ultimately several years in the making. Hear the album and you instantly understand it to be the work of a perfectionist; Jr Gong is not focused on overnight success. “Some songs just come. ‘Jamrock’ was like that,” he explains. “But other songs take a lot longer. This is street music, and the streets have to feel it.”

He can be sure the streets will. Following the path blazed by its title track, Welcome To Jamrock opens with the devastating attack of “Confrontation”—this is Jr Gong at his best, rhyming with the conviction of a street preacher and the intellect of a university economist. That essence is spread throughout the album, even when he switches pace and explores different riddims. “It’s like going to war. Sometimes you have to wear camouflage to really get in there,” says Jr Gong of the diverse appeal of the album. “Dancehall, r&b, hip-hop…it’s more about feelings. We’re not just trying to do a segment of the mix. We’re trying to do the whole mix.” This is that mix—never content to deliver a straightforward “reggae” album, Jr Gong touches on various sides or urban life as we live it today, from the smoky spiritual love ballad “There For You” to the nostalgic throwback jam “The Master Has Come Back”. Hip-hop fans will bump to “Pimpa’s Paradise” featuring Stephen Marley and Black Thought of the Roots as Nas rips his verse on “Road to Zion”, while classic reggae heads will spark to the rugged sound of “Khaki Suit” which features the combo of Bounty Killer and Eek-A-Mouse. Taken together the songs on Welcome To Jamrock convey a consciousness that’s framed by the song “For The Babies”, which Jr Gong says was inspired by the idea that “we raise our children with the same lies we were told.”

From the first listen it is undeniable that Jr Gong detonates his lyrical gifts with force and precision, but it would be a mistake to think the man’s abilities begin and end in the recording booth. A quick scan of Welcome To Jamrock’s credits reveal that he co-produced all but three of the tracks with his brother Stephen (the two are the album’s executive producers)—so while the youngest Marley suggests his fiery vocal delivery is partly inspired by seeing fierce dancehall icons like Shabba Ranks, Ninjaman and Super Cat at Jamaica’s Reggae Sunsplash festival as a youth, his work at the boards show him to be a knowing student of the early ’80s digital roots sound of Sly and Robbie, a touch of Stephen’s other productions and the magic in his own father’s recordings. All told it’s the science behind Welcome To Jamrock’s instantly classic sound and an appropriate release on the family’s Tuff Gong/Ghetto Youths International label. “It reflects us,” Jr Gong says simply. “And I say us ‘cause it’s not just me that makes the album. We’re taking the baton from the elders who made rebel music—we’re new leaders of the old school.”

The response to the “Welcome To Jamrock” single heightened expectations for the record you’re holding in your hands, and its 14 songs—songs of both love and war—have a depth that surpasses what many might have expected, given the fear of creativity and strong beliefs that permeates the current pop climate and our daily lives in general. “These are difficult years…and this has been a year of signs and wonders and mystics. We’re in a mind opening time now—a lot of people don’t have material suffering, but spiritual suffering,” he offers. “Welcome To Jamrock is about hope, and there’s still more to share. I’m still very close to the beginning.”