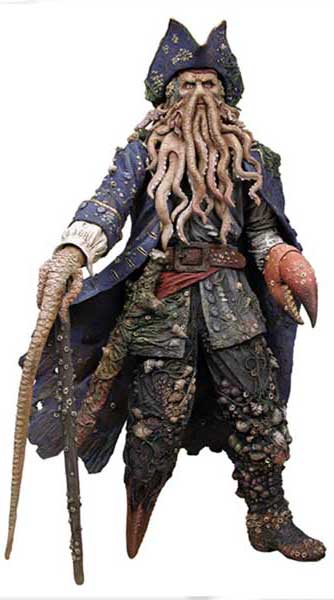 I went to see Pirates Of The Caribbean 2 today....I actually enjoyed it. Davey "Calamari" Jones is somethin' else! If you're not familiar with pirate folklore, here ya go.....

DAVY JONES' LOCKER -- "Maybe there was once an Englishman whose name was really Davy Jones. Perhaps he was the barman of the sixteenth century ballad, 'Jones Ale Is Newe,' and the locker, dreaded by seamen, may have been where he stored his ale. That is speculation, however. Actually the source of the name and the reason for bestowing it upon the bottom of the sea, especially as the grave of those who have perished in the sea -- 'gone to Davy Jones's locker' -- cannot be fathomed. The first mention of Davy Jones -- his locker came later -- is to be found in 'The Adventures of Peregrine Pickle, written by Tobias Smollett in 1751." From "Heavens to Betsy" by Charles Earle Funk (1955, Harper & Row).

Another reference expands on this information. "Since at least 1750 'gone to Davy Jones's locker' has been used by sailors to indicate death.Smollett wrote: 'I'll be damned if it was not Davy Jones himself. I know him by his saucer eyes, his three rows of teeth and tail, and the blue smoke that came out of his nostrils.' This same Davy Jones, according to mythology of sailors is the fiend that presides over all the evil spirits of the deep, and is often seen in various shapes, perching among the rigging on the eve of hurricanes, shipwrecks, and other disasters to which seafaring life is exposed, warning the devoted wretch of death and woe. The original Davy Jones may have been the 16th-century owner of an English pub, commemorated in the ballad 'Jones Ale is Newe,' who stored his ale in a mysterious locker for some reason much feared by seamen. Or Jones could be a corruption of Jonah, the unlucky biblical character swallowed by a whale, and Davy the Anglicization of the West Indian word 'duppy,' meaning 'a malevolent ghost or devil.' A third, more plausible explanation proposes the Jonah above for Jones, but derives Davy from St. David the patron saint of Wales often invoked by Welsh sailors. Jonah was indeed considered bad luck to sailors aboard the vessel on which he was attempting to flee God's wrath and the phrase was first recorded in Captain Francis Grose's 'Classical Dictionary of the Vulgar Tongue' (1785) as 'David Jones' Locker, which lends still more support to the Welsh patron saint theory. The locker in the phrase probably refers to an ordinary seaman's chest, not the old pub owner's mysterious locker." From "Encyclopedia of Word and Phrase Origins" by Robert Hendrickson (Facts on File, New York, 1997).

Two other sources put forth the theory that the term comes from "Duffy Jonah" but have slightly different definitions for the term:

And ".an expression used by West Indian sailors in reference to the devil." From "When a Loose Cannon Flogs a Dead Horse There's the Devil to Pay: Seafaring Words in Everyday Speech" by Olivia A. Isil (International Marine/Ragged Mountain Press, McGraw-Hill, 1996).

Salty Dog Talk says that Davy Jones Locker is "the final resting place for ships that sink, articles lost overboard and sailors who drown. Thus it became the sailor's phrase for death."