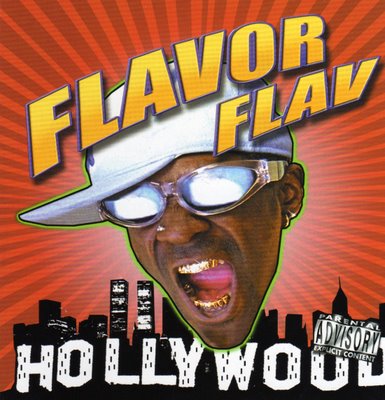 The Flavor Flav Editorial: A Teacher's View
By The Hip-Hop Teacher

As I entered my 6th grade classroom a couple of weeks ago, I asked the students "What did you do this weekend?"

Initially, I got the usual bland answers about movies, basketball practices, cheerleading activities, or just loafing around the house.

The day following the finale of season 2 of "Flavor of Love" I got a rousing response from one kid.

"Deelishis won the ‘Flavor of Love’ and New York was cussing Flavor Flav out and crying!" he exclaimed joyously. After that response, most students turned to each other and started discussing the graphic details of the show that has captivated the country.

Initially, I prepared to shut the conversation down because it was inappropriate for class, but I was curious to see where this was heading. More importantly, I wanted to see what my students actually knew about Flavor Flav. I'm completely familiar with Flav, from his musical genius to his Public Enemy days in the 80's with Yo! Bumrush The Show! to even his storied legal problems.

So I asked who Flav was, and my students replied with answers such as, "He's a pimp" and "He be doing these shows about love and trying to find different girls."

Not one mention of the Flav that I grew up on. “Flavor of Love” is not the first time my impression of Flav was crushed. I remembered “Only Out For One Thing” on Ice Cube's Amerikkka's Most Wanted. That was the first time I heard a member of Public Enemy rap in a more vulgar sexually explicit manner. I can remember thinking as a young teenager, "Why is Flav saying this? He's in Public Enemy."

In hindsight, that song was a premonition of things to come in the career of William Drayton.

These days, Flav has reinvented himself and has become arguably the king of Reality Television. This time the audience is morality-starved, rebellious teens and an attentive Middle America. His last three TV ventures ("The Surreal Life," "Strange Love" and "Flavor of Love" Season 1) have been without Public Enemy's Chuck D, the militaristic S1Ws, or Professor Griff. All eyes on Flav, and the flavor that he promotes is not so sweet to those of us that recall the Golden Era. The messages are void of revolution, social consciousness or intelligent thought, coming from the greatest hype man in the history of Hip-Hop. This is a mutation in my eyes.

Flavor has willingly allowed himself to be a part of the new minstrel show, as if Hip-Hop was short on sellouts. Most middle school children don't even know what a minstrel show is, but Drayton gives them a firm lesson and vivid examples with no assist from Miriam Webster’s dictionary.

Weekly, Flav managed to buck his eyes out, hunger for sexual attention, chase down big booties and buckets of chicken like wild jungle animals in pursuit of fresh prey. The toothy, ear-to-ear gold grin elicits more coonery than revolutionary free spirit. The females on the show are reduced to bickering over this 47-year-old man, flaunting around in bathing suits, shaking their assets, pandering for attention, and seemingly pretending to love him for him. [Oh, and most of them don’t know his legacy either.] Flavor's antics are endless, and seemingly without a lowest common denominator.

"You're blind, baby, you're blind from the facts on who you are
'cause you're watchin' that garbage."

Is Flavor Flav a coon? A sellout? A corporate puppet, as New York’s mother bluntly put it. That's not for me to say – this is Flavor Flav we are talking about. What I do know is that his audience scarcely recalls Public Enemy, a group that he was once such an important part of history. Our children, the future of Hip-Hop and Black America, only know Flav as a guy who stands for nothing; a buffoon that VH1 runs 7 days a week, several times a day.

The Black fist has been replaced by a hand that is an equal opportunity groper.

I think its safe to place Flavor Flav in one of two categories: 1) Fun loving guy with a gigantic heart, great hype man for a revolutionary Hip-Hop group. 2) A jester exploiting the very people he attempted to uplift in the 80's and 90's. Putting Flav in just one of those categories may be difficult and perhaps a gross oversimplification, but he's not presented in any other way in media, interviews, television or otherwise. There is no voice of reason, as seen in spurts on “The Surreal Life.” We can only form opinions about what we see. At one point, Flav provided the perfect balance to Public Enemy - a group that epitomized a revolutionary moment in time. Chuck D’s was never a very successful solo artist and Flav was necessary. Despite his comical antics, he was the bridge that connected the less conscious with thought provoking messages. "9/11 Is A Joke" was an example of how everything fits together like a puzzle and Flav was allowed to march militarily to the boom bap of his own funky drummer.

It's unclear to me if Flavor was posing or being a character in the 80’s for the money the same way he is doing now. Maybe songs like “Only Out For One Thing”was an indication of who Flav really is. Maybe his multiple kids by multiple women and questionable support of those kids was an affirmation of the type of person flavor was. Maybe his well publicized battle with drugs or his brief stint in Rikers Island was the true Flavor Flav. Maybe the clown we see every week on VH1 is Flavor Flav. Maybe his is a master multi-tasker that can fight the power and slap that ass at the same time. He has reinvented himself and probably is better off financially than at any point in his life, but at this point I truly hope that after this season of 'The Flavor of Love 2' that his time is up.

-AllHipHop’s columnist illseed contributed to this editorial, but is an admitted addict of “Flavor of Love.”
on November 03, 2006

I think that Flav has sold out whatever legitimate legacy he had. He still knows what time it is, it's just apparent that he's more concerned with the paycheck these days.

I feel bad for Chuck, who must be tired of shaking his head.