Someone Please Beat The Crap Outta This Fool 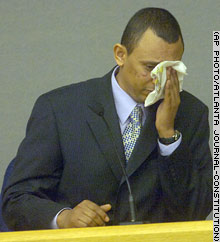 LAWRENCEVILLE, Georgia (AP) -- A jury found an Ethiopian immigrant guilty Wednesday of mutilating his 2-year-old daughter in what is believed to be the first criminal case in the United States involving the ancient African tradition of female circumcision.

Khalid Adem, 30, was convicted of aggravated battery and cruelty to children. He could get up to 40 years in prison.

Prosecutors said Adem used scissors to remove his daughter's clitoris in his family's Atlanta-area apartment in 2001. The child's mother, Fortunate Adem, said she did not discover it until more than a year later.

During her father's trial, the girl, now 7, clutched a teddy bear as she testified on videotape that her father "cut me on my private part."

Federal law specifically bans the practice of genital mutilation, but many states do not have a law addressing it. Georgia lawmakers, with the support of the girl's mother, passed an anti-mutilation law last year. But Adem was not tried under that law since it did not exist when his daughter was cut.

During the trial, Adem testified he never circumcised his daughter or asked anyone else to do so. He said he grew up in Addis Ababa, the capital of Ethiopia, and considers the practice more prevalent in rural areas.

Adem's attorney acknowledged that the girl had been cut, but implied that the family of the girl's mother, who immigrated from South Africa, may have been responsible.

The Adems divorced three years ago, and attorney Mark Hill suggested that the couple's daughter was coached to testify against her father by her mother, who has full custody of the child.

Adem, who cried throughout the trial and during his testimony, was asked what he thought of someone who believes in the practice. He replied: "The word I can say is 'mind in the gutter.' He is a moron."

The practice crosses ethnic and cultural lines and is not tied to a particular religion. Activists say it is intended to deny women sexual pleasure. In its most extreme form, the clitoris and parts of the labia are removed and the labia that remain are stitched together.

Knives, razors or even sharp stones are usually used, according to a 2001 department report. The tools often are not sterilized, and often, many girls are circumcised at the same ceremony, leading to infection.

It is unknown how many girls have died from the procedure, either during the cutting or from infections, or years later in childbirth. Nightmares, depression, shock and feelings of betrayal are common psychological side effects, according to a 2001 federal report.

Since 2001, the State Department estimates that up to 130 million women worldwide have undergone circumcision.

Copyright 2006 The Associated Press. All rights reserved.This material may not be published, broadcast, rewritten, or redistributed.
on November 01, 2006

Prison is too good - somebody get a sharp stone ready for this guy.